Stockholm Syndrome Destroys Quest For Freedom: The Case Of The Ambazonian Struggle 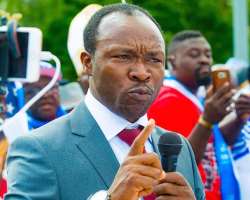 Many people around the world are asking what happened that after six years of massacres and genocide in Ambazonia, with tens of thousands killed, hundreds of thousands in exile, thousands in the jails of Cameroun, and millions displaced, some so-called Ambazonians choose to fraternize and ally with the enemy, while others have taken abode in the country of the very State their compatriots are trying to separate from. Science offers us an answer, suggesting that the Stockholm Syndrome is responsible for such bonding between hostages and captors.

Stockholm Syndrome is a condition in which hostages develop a psychological bond with their captors during captivity. It results from a rather specific set of circumstances, namely the power imbalances contained in hostage-taking, kidnapping, and abusive relationships.

Emotional bonds may be formed between captors and captives, during intimate time together, but these are generally considered irrational in light of the danger or risk endured by the victims

There are four key components that characterize Stockholm Syndrome:

- i - A hostage's development of positive feelings towards the captor

-ii- No previous relationship between hostage and captor

- iv- A hostage's belief in the humanity of the captor, ceasing to perceive them as a threat, when the victim holds the same values as the aggressor

Stockholm syndrome is a "contested illness" due to doubt about the legitimacy of the condition. It has also come to describe the reactions of some abuse victims beyond the context of kidnappings or hostage-taking. Actions and attitudes similar to those with Stockholm syndrome have also been found in victims of sexual abuse, human trafficking, extremism, terrorism, economic oppression, financial repression, political repression and religious persecution.

This is because Stockholm Syndrome can be argued as "another method of coping with the stress and danger...similar to some forms of coping in that the participants do not directly address the problem but find a way to cope with the situation by identifying with the aggressor. Ambazonians have been in a situation of captivity for more than 60 years and many of them have developped some positive feelings towards the captors or oppressors. This has been experienced in various ways:-

3- Those who think they have escaped LRC but they stayed so long with LRC and its ways that they imported these ways into the ways and means LRC has been acting.

The Ambazonian quest for Independence has revealed the various faces concealing various facets of the Stockholm syndrome we have been subjected to, by the effect of LRC habits. We will not delve into the official divisive terminology such as; Unionists, Federalists, con-federalists and Independentists or separatists. We are concerned about those who claim to be Ambazonians that is -having embraced the struggle but still have LRC-like effects deeply imbibed in them.

Why would one condone with Ikome Sako surrogates’ statements like " Sako till Buea", "no elections till Buea or no elections in wartime"? Why do we see a reworking of typical LRC slogans like His Excellency, Supreme military leader, and other statements indicating his deification by his supporters? This assertion is further worsened by his surrogates, activists, supporters and his bitcoin acolytes. This group of persons forget to remember that Sako, himself was handpicked by the Restoration Council (RC), and was told there would be accountability, democracy and be subject to the calendar of the RC that is the supervisory body of the Restoration of the Independence of the Federal Republic of Ambazonia.

As concerns Lady Marianta, Ambazonians had seen in her a different figure, unrelated to the usual Sako, Chris ANU, Ayaba, Boh Herbert, Akwanga, Anyangwe etc that have been associated to the struggle since its inception. She brought a youthful and determined "what a man can do, a woman can do better" aspect to the struggle, and so many ambazonians adopted her and her smile. Unfortunately, her sudden turn around in the struggle was like a dastardly stab in the back of her numerous supporters, who had lots of hopes in her. The decision to stay away or suspend elections, according to her so-called constitutional rights, really show her naive appreciation of the struggle. It is surprising that in the middle of an electoral process, she single-handedly decides to forestall the elections after she was the one who started the process.

Elections should be a normal process in any government or aspiring governance structure. People, nations or states should embrace any electoral process with enthusiasm and verve, so that only the most pebliscited candidate is allowed to hold office during an accepted term, after which the electorate is given another opportunity to prolong or end his/her term of office. Any supposed leader who refuses elections, is unsure of his/her leadership and is not eligible for any term of office.

Southern Cameroonians who had known democracy in Africa, before democratic principles were introduced on the continent, at independence, are today suffering from the Stockholm syndrome, as a result of their prolonged captivity by LRC. They inherited and embraced all the bad habits of their captors for more than 60 years.

The Restoration Council is an organisation that has vowed to restore the independence of the former British Southern Cameroons territory, or Ambazonia. This means it has decided to adopt a strategy to acheive this goal. The strategy may not please all and sundry, but they used to be the only objective body that had an encompassing roadmap towards winnng the AWI (Ambazonian War of Independence) and forcing her independence from LRC. The RC is expected to be made up of hounourable persons who have given up thier time and money to belong to, and keep war alive and the heat on the government of LRC. The RC members who are not paid an allowance, do have other breadwinning and tax paying activities in their adopted countries. They are different from the overfed and fattened LRC type parliamentarians who have just three to six weeks, every six months, to meet and endorse bills from the president of LRC. Lady Marianta sees herself in this position, and believes she can send bills to the RC, in her favour for endorsement, a typical symptom of the Stockholm Syndrome. The RC has done its best to establish and impeach governments who go against the desires and principles of the Constitution of the Federal Republic of Ambazonia (FRA), make laws, raise funds to support the AWI.

The resolve by some ambazonians to remain behind and practice the personality cult (SISSIKU, SAKO, MARIANTA) unfortunately, shows that we are basking in, or are severely affected by the Stockholm syndrome because of our prolonged bondage under LRC.

Chris ANU was elected president of the FRA, by his faction the Ambazonian people, represented by the Restoration Council. It is not funny and unfortunate that the very persons who were brought up and introduced to the world by the RC, have turned their backs on the council and declared them null and void.

What sort of Ambazonia are we advocating? One where dictatorship and disrespect for laid down principles would prevail as in LRC? One where the personality cults, like SAKO FOREVER or SAKO till Buea; or MARIANTA (Who was not known till 6 months ago) suddenly claims that she is a strong woman rather than a woman respecting a stong institution? What should we do to eliminate or clear off this Stockholm syndrome that is deeply embedded in our people?

We should not forget that the idea of an Interim Government was brought up by the Restoration Council and that this council brought up Sissiku, Sako and Marianta, without which these persons would have been unknown nonentities. For the first time, the RC has brought up someone out of reasonable and well conducted elections. He deserves the rights and respect unduly given to previous unelected leaders, whose only response was a 'dastardly stab in the back of the RC', which claims to be representing the entire Ambazonian people. Come to think of it, why is it that these defunct, impeached past leaders or destituted leaders all want to disolve the Restoration Council?

The Stockholm syndrome is once again responsible for the distortion of our mentality, hence our behaviour and our mental disability to reason things out, in an organized manner.

Our people have suffered for more than 60 years and we cannot afford to suffer again, after a hard-earned Independence struggle. Why are people shy to embrace the leadership of Dr. Ayaba Cho, and recognize that he was elected by AGOVC, as President and CIC of the Ambazonian Defense Forces (ADF)? He set the ball rolling by moving to Ground Zero and launching a counterattack from Dadi, which has inflicted untold pain and misery to the captors. His steadfastness has given hope to millions of Anbazonians. Unfortunately, LRC mentality and the Stockholm syndrome has pushed fellow Ambazonians to hunt their liberator as if he was an enemy. The captor has paid fellow Ambazonians to sabotage his activities, and if possible, kill him.

It is better denouncing the situation, which is the only way to start the treatment of the problem, not forgetting that South Sudan revolved into a post independence civil war, with warlords trying to gain power in a country that was equally or even more wealthy than Ambazonia. We have warlords that are already taking over the struggle, even if we have not yet had independence. Ambazonians must pull together and free themselves from the Stockholm Syndrome, so that they can prosecute their war of independence to a logical conclusion. They must prepare for negotiations as a team to have their freedom.