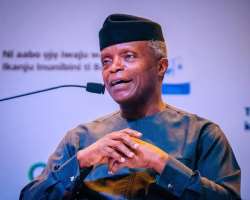 As the ruling All Progressive Congress officially flagged off its campaign rally ahead of the forthcoming general elections today, Vice President Yemi Osinbajo has refused to attend the flag-off rally.

The rally was held on Tuesday in Jos, the Plateau State capital, where the APC National Chairman, Abdullahi Adamu, was to present the party’s flag to its presidential candidate, Asiwaju Bola Tinubu.

While President Muhammadu Buhari who also doubles as chairman of the party's presidential campaign council, is present at the rally, the Vice President Osinbajo was nowhere to be found.

Essentially, the vice president's absence was yet to be clear as at the time of filing this report.

However, it would be recalled that some had a few weeks ago raised concerns over why Osinbajo is excluded from the APC Presidential Campaign Council.

According to Daily Post, rumoure have it that Osinbajo deliberately distanced himself from Tinubu’s campaign committee for reasons best known to him.

Vice president Osinbajo had contested in the 2022 APC presidential primary election, which he, however, lost to Tinubu.