Hanging with Chemphe in Hong Kong

By Africa Alliance of YMCAs 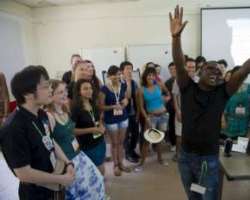 Chemphe at his peacebuilding workshop.
Listen to article

You all know the cool, keeping-it-real Chemphe with the smooth voice and energetic stage presence. But I have discovered the king of Urban Life has some hidden talents.

Two months back I hooked up with Chemphe when he joined forces with African YMCA youth to produce a campaign song called 'Subject to Citizen'. This was for our continental programme with the same name, which is about youth empowering themselves to make positive changes in Africa. After launching the song on YouTube, we got some global attention, and invited Chemphe to join us in Hong Kong at the World Alliance of YMCAs.

In short, he rocked! When Chemphe first stepped on stage at the opening of the International Youth Forum, people did not know what to expect. Within minutes, I watched as youth were singing along, or standing open mouthed at his energy and the message of the lyrics: “Don't see me a subject but a citizen, and together we will rise… I'm a youth with a dream…”

One of the highlights for me was Chemphe's workshop on peace-building. He proved that not only can he connect with an audience when he is on stage, but also when he steps off and into the hearts and minds of the people. Using the youth's own experience of conflict and peace, he worked with the 80 participants who represented 68 countries to show how music is a powerful way of uniting people and of getting messages across to inspire, empower and educate. Forty youth from 15 different countries then went on to perform with him at a Gaia concert later on that day which was attended by about 1 200 people.

“I was in Ghana when Chemphe developed the song with the African youth and in Hong Kong, as part of the international group I then got to join in. The message of the African youth from May 2010 became the message of the worldwide youth of the YMCA in July 2010. Chemphe has really become an African YMCA Champion because when he performed and interacted in Hong Kong, it was obvious that he was now fully part of the Subject to Citizen programme,” said Sarah Simmank of YMCA Germany.

Chemphe really rose to the occasion when he took part in an intergenerational dialogue panel, with three other participants. The concept was that in moving the youth agenda forward, we need to listen to each other – those who are very young in their early 20s and also those in their latter years. As a musician and African star, Chemphe is very comfortable doing his thing on stage. But this was something really different and pushed him out of his comfort zone. But it gave him the opportunity to show a different side of himself and he shared from his lived experience. When discussing challenges and crises youth face, he explored the poverty of dignity and lack of self-belief that African youth face. This, he said, was the root cause of our obvious challenges such as unemployment, poverty, disease and so on. “If you believe you can make a change, this is where it all starts” was the message.

In his free time, we decided to do a bit of sightseeing and shopping. We put all our African bargaining experience to good use and Chemphe got an awesome shirt for one of his next videos so watch out for it, as well as a really cool pair of shades for his stage persona. He even entertained some of the subway travelers by singing songs about what we were up to.

We also got quite into the Hong Kong culture and learnt to say a few words – well between us I think we could hold half a conversation, much to the locals' delight. A lovely evening was spent at a local family restaurant where we drank rice tea and were taught how to use chopsticks. The family was so great they even lent us umbrellas to brave the pelting rain during a typhoon warning.

The other performances he did were really great – he sang in isiZulu (a South African dialect that he learnt on the spot) as part of the official opening of the World Council and also during a session on global impact, again with the youth, as well as during an evening concert.

“Chemphe may be Ghanian but he represented Africa every time he stepped onto stage and when he interacted with people. I was real proud to sing with him and share our African message with the worldwide YMCA movement and the public of Hong Kong,” said Harold Obeng-Yeboah, from Ghana who was part of the original conceptualisation of the song in Ghana earlier this year and who performed with Chemphe when he sang the Subject to Citizen song.

By: Gil Harper, for Africa Alliance of YMCAs