NORTH: BETWEEN AGRICULTURE AND OIL 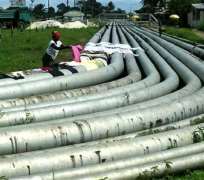 Recently, the Minister of Petroleum announced that the Nigerian National Petroleum Cooperation (NNPC) is resuming oil exploration in the northern part of the country. The oil presently mined comes from fields in the South-south zone that borders the Atlantic Ocean with increasing exploitation of offshore wells. This is not the first time an attempt is made to explore oil in the North. All the recent explorations have been in the Northeast with the last one stopped abruptly in 1999 by the Obasanjo administration after only three trial wells were drilled.

The reasons behind the apathy of exploring oil in the North are clear. With several wells discovered and huge reserves remaining by the ocean side at comparatively shallow depth, investors are naturally reluctant to venture into prospective reserves that are over 1000 kilometers away from the sea and at levels more than twice the ones they are already drilling in the Delta region. Added to this problem is the suspicion in some quarters that empowering the North with oil in addition to its population will have serious implications for the country's balance of power. The northern part has largely been criticized as parasitic on the south despite its decisive contribution to the food security of the country. Oil accounts for over 90% of the revenue of the federal government and all States and local governments in the country, except Lagos State.

No doubt, people from the northern part of the country would be glad to see oil discovered in the region as manifested by the way they welcome the announcement. They have been agitating in the Senate for resumption of exploration activities since they were stopped over a decade ago. In their minds, they envisage an end to the poverty that has ravaged the region and made it impossible to catch up with the southern part of the country. There will be a boost in economic activities and infrastructure. And so on. Oil, in short is a welcome guest here.

The two areas suspected by geologists to be harbouring hydrocarbons in commercial quantities are those situated in the Chad formation and Benue Trough, all falling largely within the Northeastern zone. In 2003, the then Senator representing Bauchi South sponsored the publication of a study titled Oil Exploration in Northern Nigeria: Problems and Prospects. The book, among many things, clearly showed the lack of commitment of oil companies to exploration activities in the North. Over sixty wells were drilled in the Delta region before commercial quantities of oil were discovered. Comparatively, only three were drilled in the Benue Trough. In addition, studies have shown that due to the nature of the rocks, hydrocarbons in commercial quantities could be found only at depth of 6,000 meters in both Chad and Benue formations. Previous explorations did not go beyond 3,000 meters. Finally, the 2D seismic equipment used was archaic, instead of the 3D and 4D surveys that are presently employed. To be fair to the reluctant oil companies, these limitations were deliberately ingrained in their terms of contracts by NNPC. These inadequacies, in the view of many analysts, form an insufficient ground to reach the conclusion that there are no hydrocarbons in commercial quantities in the Chad and Benue formations.

So without doing away with the deliberate inadequacies of small sampling size, insufficient depth of the trial wells and employment of archaic exploration equipment, the renewed effort of the NNPC is likely to return the same "no oil" verdict as did previous explorations. How the NNPC would, especially in its present comatose state, avoid that conclusion is difficult to figure out. That will be sad news for the hopefuls here. But for me, it is a verdict that I will be very glad to receive, though not without strong reasons.

First, I believe the country is better of with a diversified economy. Instead of exploring oil fields in the North, it should let the region remain a food basket and a green source of livelihood and income. Successive federal and state governments have been paying only lip service to agriculture. They count the potentials of the sector but discourage its production. Beyond the supply of fertilizer which is the main concern of the governments, which itself is inadequate but maintained for its lucrative returns into pockets of officials, governments should have vigorously ventured into solving the various constraints that impede the growth of agriculture as a veritable revenue earner in the country. However, agriculture has been on auto-control for many decades now.

Beside the advantage of diversification, I am afraid that the revenue accruing from additional oil production as a result of the discovery of new reserves in the North may not compensate for the losses that comes with it. Agriculture has for decades remained the greatest contributor to our GDP, at 40% average. But agriculture and oil are hardly coexistent especially in the way they compete with each other for land and labour. This will have serious implications on the economy of the region. It is worthwhile to consider the land dimension of their relationship.

Oil activities in the Northeast will certainly mean appropriation of arable land currently used in agriculture. Our experience in the Niger Delta has shown that oil contaminates land extensively. In the case of the Northeast, such pollution will not be limited to the oil fields but would also extend to all rivers and wetlands into which the spillage would flow. Within 50 years of oil production in the region, fields in the Chad Basin as well as the upper and lower Benue River Basins will all be spoilt with oil. The oil fields of Alkaleri alone, for example, will have the capacity of contaminating Rivers Gongola and Benue and their wetlands. If any one doubts my assertion, he should visit the Niger Delta and see the extent of ecological devastation there. That damage happened in spite of environmental impact assessments and agreements on best environmental practices by oil companies. It is also happening in spite of the Petroleum Act and the Department of Petroleum Resources. Government is not interested in enforcing laws in this country. British Petroleum is there busy settling claims of fishermen rendered redundant by the spill in the Gulf of Mexico. I do not know of any fisherman in the Niger Delta who is compensated, even once, for similar acts of negligence by oil companies in the region.

Let us be honest. There is no amount of assurance that will convince me that the same insensitive officials and corrupt multinationals would apply best practices in the North.

So the relationship between agriculture and oil production is mutually exclusive, at least here in Nigeria. And contrary to popular belief, oil production carries the risk of making Nigerians in this part of the country poorer beyond their current 70% average. That is because oil proceed will not be accessed directly by the ordinary citizens. It belongs to government and its officials who will not hesitate to squander it the way they have been doing to our earnings since the 1970s. Very little, if any, trickles down to the common man. That is why its contribution to our GDP, "the total income of everyone in the economy", is far lesser than that of agriculture.

In the end, the common man who is 70% hungry will further be deprived by allocating his agricultural field to an oil company and spoiling his wetland with oil and nothing is given to him in return. I cannot see how he can get richer through such a deal. In the end, government officials in the region will be richer and more will accrue to the federation account for sharing, but less will reach the farmer and his household. And where over 80% of households are farmers, one can only imagine the crisis that will ensue in all the eight states from Borno to Benue.

Agriculture, on the other hand, has a lot of potentials for making both the country and the common man smile, especially now that new markets have opened in Asia and South America. That is why our agricultural exports are fast increasing yearly. Focusing on these, instead of oil, means conserving our environment, more income to the common man, and more employment opportunities at the grassroots level. To sustain the growth in agricultural export, government only needs to harness access to these markets through various measures. The farmers will naturally produce more with every increase in demand. Their earnings will increase dramatically and it would not take time before they bid farewell to poverty, unlike the case of oil that will only make them increasingly dependent on the crumbs that the elite would leave behind. The same elite has sustained the poverty of farmers when he banned imports in order to keep food prices low. In essence, the Nigerian farmer is forced to subsidize life for the rich. Yet, the elite is ready to allocate choice agricultural lands to foreign farmers, guarantee their production and allow them to export it, freely!

My conclusion, therefore, is that the country will be better of by investing in agriculture rather than oil in the North. Unfortunately, this is not a decision for the common man to take. That is the domain of the elite who has never shown any remorse for the hardship he could inflict on the citizens of this country.

I wish the NNPC would this time and always return the 'no oil' verdict. That will certainly mean a better future for this country and its citizens. The parasite that feeds its host would better be left alone.