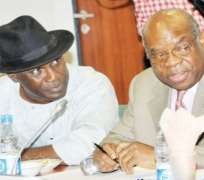 Majority of Senators during debate criticized the budget, particularly for lacking detailed projects in which the capital budget was to be applied on.

As a result the Senate President, Senator David Mark directed the Chairman of the Senate Committee on NDDC, Senator James Manager (PDP, Delta), whose committee superintends the budget to submit all the details of the budget to the Senate by Thursday (Tomorrow) for possible consideration and approval.

"We are actually hard pressed - two wrongs cannot make a right – let us get the details tomorrow and see whether we can pass it," the senate president, David mark told the NDDC committee chairman, James Manager (PDP Delta state). "It’s like we are between the devil and the red blue see."

According to Senator Manager, the NDDC committee has all the details sent to it by the presidency and will tender them on Thursday. He however notified the senate that NDDC is notorious for submitting budget proposals late.

"If the next year budget does not come by September this year, they should forget it," the senate president said. "We won’t be taking their budgets outside September anymore."

The NDDC act stipulates that they submit their next annual budgets before the end of September of the current fiscal year.

However, some senators criticized some allocations in which some offices proposed to spend up to half a billion Naira on personnel alone.