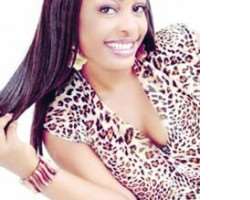 Ella Njudigbo is from a close-knit family in Anambra State with just two younger brothers. She is the only girl and the first child. This graduate of Imo State University studied Public Administration/ Government.

Apart from being an actress, she has written well over twelve scripts. “Yeah, I write scripts. I started writing scripts before I went into acting. I have written nothing less than 12 scripts that are in the market. Twelve is an understatement. But I said 12 because some are not yet released.”

This thick-lipped beauty says she has never dated a white man in her life. She sounds very much like Benita Nzeribe, who proudly tells you her man is a Nigerian and not Oyinbo, because she is patriotic. Hear Ella more: “I don't know about dating any white guy. I have not done it in my life. I don't know when I would do that. For now, I don't see it coming.”
She tells National Life about the day she was embarrassed by her fans because of her lips and how she wriggled out of the embarrassment. Below is more of her story:

Passion for acting
Somehow, I knew I was going to be on the screen. But I really wanted to opt for something like presenting in Broadcasting. When I was a child, after watching Eugenia Abu, the newscaster and others, I would go into my room, lock my door, carry a newspaper, sit in front of the mirror and be reading: “The Federal Government said this and that....” Then I wanted to study Mass Communication. But I didn't get it. So I ended up studying Public-Admin and Government. While I was in school, there was a time in my life I needed to take my mind off some things. Before then, I had the passion. But I didn't know how to go about realising my dream. Still, when watching movies, I would say: “Ah! I can do this now, can't I do it?” I got a family friend's number, called him up and I was like, “Hi, I heard you are a director. I want to act.” He asked me, 'Are you sure you can act?' I said yes. He said okay, that I should look for where I can go for audition. Along the line, he wanted somebody to write scripts for him. Helen Ohameze was writing for him before then. But she wasn't available at the time. So I told him I could write for him. He was amazed. He called me back, I went to write one for him and it was good. So, we shot that film. From there, I went for other jobs. In fact, that's how I started acting.

Acting and its challenges
Challenges are there, definitely. But I have not had many. It's just once in a while, like when the press came in, some little scandals, things they say about you that are not really true. But I have learnt to ignore them all. I've developed a thick skin that one requires or needs to be in showbiz. I'm used to gossips and scandals. But I don't pray for worse things to come up. I'm a very free person. I'm easy-going. I love to do things the way I want to do them. But these days, I have to mind what I do because people are watching. I am a role model to a lot of my fans.

Things I won't do now
There are so many things I won't be able to do now. For instance, there are many places I can't go. I have to be careful because a lot of things might happen there. It is better I don't go or I go with other people. Most times, I avoid places that don't have enough security, because when people love you and see you as a role model, they can go the extra mile just to touch you. It is just like if I see Kim Kardasian today. Oh my God! I will fly to touch her. So, I won't blame anybody who does the same to me. But I have to be very careful.

Embarrassments from fans
Yes, I have been embarrassed a number of times. A guy saw me the other day and he was like, 'Oh, big lips! Jesus, na the lips wey I dey see for screen be these? Oh my God, see the lips o!' When he was saying this, a lot of guys were there. And he was just calling their attention to my lips. People around were looking at my lips and they were all laughing. I was embarrassed that day but I just smiled over it and left the place.

Being snobbish
Why would I snob a fan? I can never snob a fan. Without them, I would never be here. They are the ones that watch me, want to see more of me and want to buy my movies. Without them, I will be nobody. You can act for fifteen years and nobody will know you. I would never snob my fan even when I'm in my worst mood. I could say, “Hello, how are you?” and I would continue to where I'm going. I would definitely acknowledge your greeting. It is not cool to snob a fan.

Childhood
My childhood was normal. There was nothing extraordinary about it. I was just like every normal girl, every kid on the block. I grew up in Lagos, in Aguda, Surulere. I come from a Christian home. So when I wasn't in school and I wasn't having extra-mural lessons, I was in church, as a chorister. I used to do a lot of things in church then, including block Rosary; we are a Catholic family. My mum is a disciplinarian, so she didn't bring me up tolerating anything funny. She held on to me tightly.

Dad's support
My dad did not support me at first. But now, he is also in support especially when people come to tell him: 'Ha! Your daughter is in movies. I watched her,' and all that. So, with that, he also gave his support. The problem initially was school. I started acting in my third year. So, he thought when the stardom starts getting into my head, I might just abandon my education. I told him no and I went on to graduate. Immediately I graduated, he became cool with me.

My style
I can go for anything trendy. I do a lot of cleavage-flaunting, but not all. Yes, I love sexy outfits and I love to wear short dresses a lot. I hardly wear trousers. So, I flaunt my cleavages, but not too deep.

Hot legs
I wish I was wearing something short so that you would see my legs. I won't like to talk too much about them. I want to be modest. God blessed my legs.

Most scandalous story
I have not really had any. But there was one written about me and Imo State governor. It was so funny because I never set my eyes on the man. I have never seen him, never met him, never known him one-on-one. So, when I saw the write-up with his picture there, I felt pity for him. I was like, “Oh, poor man!”

How I overcame it
First, because it wasn't true, I didn't feel too bad about it. But I rather felt sad for him and his family because I didn't know what he would be going through. But as for me, I knew it wasn't true. So, I didn't really feel bad.

Reactions when I'm angry
I have a very short temper. That's one shortcoming I have. But it disappears as fast as it comes. It comes like that and it goes like that. And when it goes, you would be left wondering how fast. I don't think I have ever fought in my life. I don't fight. I can talk. But if you want to fight me, I would run away. I either shout or go somewhere to cool off.

Roles I won't accept
Baring it all!

Kissing on set
Why they say it's not real is because they might be doing it lip-to-lip, but they are not feeling anything. You don't even remember doing it because other people are around: the director is there, the cameras, your colleagues, you know everybody is watching you. But because you are acting, you try to make it look real. So, you can kiss and smooch it doesn't matter, it's just a job and once they say, “Cut!” everybody goes his way.

My guy
I can tell you about him. But I won't tell you his name. Yes, there is a guy in my life and I'm happy being with him. I love him and he loves me. We are happy together.

Dating a white man
I don't know about dating any white guy. I have not done it in my life. I don't know when I would do that. For now, I don't see it coming.

Heartbreak
Of course, I have had my share of heartbreaks. That's life. You break some people's hearts and some people break yours, too. It happens everywhere and not only to celebrities. Because celebrities are in the limelight, ours ring so much bell that everybody hears about it.

Overcoming heartbreaks
I believe in myself, knowing that I have a better tomorrow without the person and knowing that I will get what I deserve. And believing strongly that something better would come later.

Marriage
Soon, but I don't know when. I'm not in a hurry for now. I don't want to rush into it and end up in the hands of a brute who would batter my face.