"present Security Situation In Nigeria Is Better Than What It Was In,2015", Ebonyi Apc Chairman. 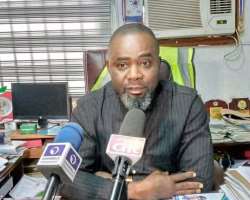 The Chairman, All Progressive Congress, Ebonyi state, Chief Stanley Okoro Emegha said President Muhammedu Buhari led Government has really tackled insecurity in the country compared to what it was prior to 2015 when the insurgents he said were on rampage in different parts of the country .

He maintained that the celebration of this years Nigeria's Independent anniversary is unique in the sense that the ruling All Progressives Congress, APC has entrenched even development in parts of the country.

Chief Stanley Emegha stated this in Abakakili in his statement to mark the 62 independent anniversary of Nigeria and the creation of Ebonyi State 26 years ago.

He said that the transportation sector has been greatly transformed with so many roads fixed coupled with the revitalisation of the railway lines in the country among others.

The APC Chieftain described President Muhammadu Buhari and Governor David Umahi as leaders with uncommon approach to governance adding that they have conscientiously achieved the dreams of the founding fathers by promoting the spirit of oneness and hardwork among the people.

"President Muhammedu Buhari led Government has to a very large extent tackled insecurity compared to the experience of Nigerians prior to 2015 when the insurgents were on rampage in parts of the country including Federal Capital Territory Abuja bombing, maiming and killing innocent citizens on daily basis.

"In the transportation sector, a lot have also been done with so many roads fixed as well as the revitalisation of the railway lines in the country. There are other catalogues of achievement".

"In Ebonyi, the stories of Governor Umahi's giant strides abound hence there is no sphere of life you will not see his footprint. He is a silent achiever whose Factsheet covers security, infrastructure, agriculture, health, education, economy et cetera".

"Above all we are celebrating among other feats, our indivisibility as first, Ebonyi people and citizens of the giant of Africa - Nigeria. May I thank the people for their support to the present administration and also standing firmly with the change mantra at all levels of governance".