Dear Obidients, There Will Be No Angels And Demons In 2023 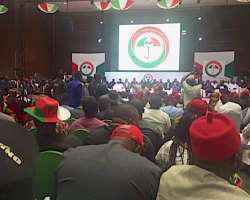 The rains are slowly abating and harmattan is coming. The year is winding and what that reminds more than anything, more than the glitz of Christmas and the spectre of a brand new year, is that the 2023 elections actually validates the year. Its a year we have been looking forward for years. A special election that will see non-incumbents slug it out for the first time since 2007.

The complex, unpredictable vortex politics can be has spurned a tricky triachy this time. Peter Obi, with all respects to him, has assembled an admirable chunk of the country's 'woke' population. He is flanked by huge favourite Tinubu Ahmed Bola, dubbed the father of Modern Lagos, whose political ingenuity scarcely fails him, and, Atiku Abubakar whose resilience, strong desire to be president and sometimes far-left stance may not be overlooked. So we have the PDP, LP and APC in the ring poised for a royal rumble.

It is important the reader here understands i am not a neutral, I clearly do hope we have a Bola Tinubu presidency for i do believe what he lacks in oratory sleekness he made up for with ideas and precision, so you can call this writer a biased one and decide if you are willing to throw away the baby and the bathwater.

Tinubu s the most realistic of all candidates. He doesn't talk about space ships and inter-galactic dominance, he preaches about the basics, the tiny aspects of society that if improved can sum up a significant whole. A modest manifesto, picking mostly the low-hanging fruits first.

Atiku's candidacy offers something slightly similar. No big promises just an ernest desire to handle society's basics and all. The pair with Governor Okowa earns my respect on the philosophical sphere, but ultimately makes no political sense. Weakened by Peter Obi's prodigal trip, shocked by Governor Wike's rebellion and faced with an almost inevitable voter apathy in the South-East (which should have been swept by Atiku if not for Obi's ambitions and IPOB's anti-voting stance) Atiku's shot at the Presidency seems headed for the rocks. There will be no surprises here.

There has been surprises overall though, most prominent of which has been Obi, silver-surfing through the clouds of Nigerian Internet. A hoard of Obidients, galloping and ever ready to gore all on their path.

While there's a lot of intellectual insincerity surrounding Obi's campaign, there are still salient points to glean from the hashtags and road shows: a new consciousness has been wakened, a new group of Nigerian electorates are born and while they will not make it this time, the next Nigerian President will have to somehow address them.

Peter Obi stumbled on a diamond in as opportunistic a way as a carnivore who chances upon a dismembered elephant. It's a win-win for him either ways, for this group which started as #endsars and metamorphosed into #obidients very quickly, it doesn't seem like election defeat would disband them almost immediately. Their social media presence and their voices will keep supplying the perfect relevance Obi needs to negotiate behind and messiah-up in Public, a deft politican here and a martyr there.

2023 is almost set. Its been won and lost already. It will also be the most colourful and debated election in our history.

There's only one problem here: prospective voters have been broken in two; patriots i.e Obidients and those who have been termed enemies of Nigeria. Therein lies the problem. This could make physical showdowns across polling units on election day very possible.

There's an unfair indoctrination going on at the ranks of the Obidient movement, a frightening school of thought that makes adherents believe that the Obi movement is so divine that supporting anyone else is disobedience to God, disservice to the nation and an act worthy to be classified as a outright cynicism.

This demonization and criminalization of anyone not supporting Obi is starkly in contrast with the concept of democracy where people are free to support whoever they want, vote whoever they want and stand by their prefered candidates without feeling they have sinned.

Its a mockery of democracy, an act of bully and a sadistic, egocentric dip in our politics. While we look ahead, to a Nigeria of our dreams, the routes may be different but no one wakes up in the morning with thoughts of just how to destroy the country. No one deliberately makes a miss-step powered only by apocalyptic imaginations and spite for nation.

This sense of entitlement, this ennobling of personalities and chronic moral superiority syndrome is why the obidients believe that it is either their way or the highway. A more selfish, feel-good political indoctrination of this manner has never before been administered in our polity.

This comment by an opinion leader like Jones Fcc is a ready fuel for the intolerance of the obidients. The debate has not been altered, the debate has been jettisoned and intellectual tyranny installed.

So the grandeur of 2023 will likely be anti-climaxed by people like Jones Fcc who already minimises the elections to be a clash of light and darkness, a battle for the soul of Nigeria (where three-forked devils are involved) and a heroic act of stopping all saboteurs. Sadly, even in this democracy, saboteur now mean anyone not supporting Peter Obi. This strategy of stripping everyone else of every ounce of morality is either born of naivety or pure mischief.

Like Tinubu, Obi was an 8 year Governor. Like Atiku, Obi is also from the establishment. Not a Trump or an Obama. A regular everyday Nigerian politician whose governorship of Anambra State is still under the microscope and whose media outings suggests to space ships, Atlantis, aliens and other vague, utopian imaginations.

For Nigerians, we are all looking at getting to the next phase of growth and nationhood. Our 200m+ population will choose from the three roads in front. Each with unique calculations, each yearning for a better country and each expected to respect the wishes of others.

Hon. Julius Bokoru is a Chieftain of the All Progressives Congress, an essayist, public commentator and the media assistant to Chief Timipre Sylva.