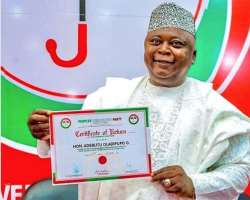 Justice Oguntoyinbo who nullified the exercise on Tuesday, ordered a fresh exercise within a reasonable time to accommodate all interests and groups.

The suit was filed by Prince Adesegun Seriki and three others against Independent National Electoral Commission (INEC) and the PDP.

Prince Seriki and his Co – plaintiffs sought the Court’s explicit order to enforce their rights as the rightful and legitimate PDP candidates for the 2023 general elections in Ogun State.

The Nigerian Voice understands that two factions of the PDP had conducted parallel primaries that produced Oladipupo Adebutu and Segun Sowunmi as candidates of the party in the 2023 governorship election.

The primary that produced Sowunmi, which was held at the secretariat of the Nigeria Union of Journalists (NUJ) in Abeokuta, the state capital, was said to have been monitored by officials of the Independent National Electoral Commission (INEC) and members of the Inter Party Advisory Council of Nigeria (IPAC).

However, the primary that produced Adebutu, a former member of the house of representatives, was held at the Olusegun Obasanjo presidential library in the state capital.

The court ruled that both primaries conducted didn’t follow the principles of the electoral act.

The judge also ordered that a rerun should be conducted within 14 days.

Speaking with journalists after the judgment, Monday Mawah, counsel to Sowunmi, said the matter was brought by some delegates who said they were not allowed to participate in the state congress.

“My client, Segun Sowunmi, was also sued as the fourth defendant in the matter, but my lord in his infinite wisdom today nullified the entire primaries that took place in Ogun state, from governorship to state assembly level, that they did not comply with the provisions of the electoral act,” he said.

“Therefore, a fresh primary has been ordered to be conducted by INEC within 14 days from today.”