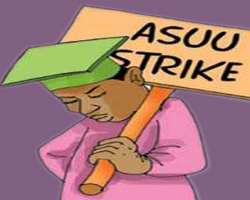 Justice Polycarp Hamman of the National Industrial Court has struck out a suit filed by the National Association of Nigerian Students (NANS) seeking to compel the Academic Staff Union of Universities, ASUU, and the Federal Government to call off the ongoing strike action.

The suit was dismissed after it was withdrawn by factional President of NANS, Umar Faruk Lawal.

According to Lawal, he had filed the suit marked NICN/ABJ/273/2022, for himself and on behalf of NANS.

The suit had ASUU as 1st Respondent, the Minister of Education and the Attorney-General of the Federation were listed as 2nd and 3rd Respondents, respectively.

Mr Lawal notified the court on Tuesday that he had filed a motion for discontinuance of the case.

He stated that his decision to withdraw the suit was based on account that the students body denied him of presidency of the union. Consequently, Justice Hamman struck out the matter.

While Lawal who is of the Department of Library and Information Science of the Bayero University, Kano, insisted that he won the election, the NANs Convention Planning Committee declared Usman Barambu as the President-elect of the association.