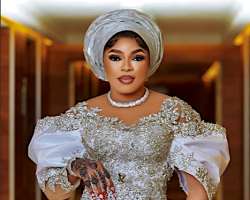 Controversial crossdresser, Idris Olanrewaju Okuneye better known as Bobrisky while retaining the position of side chick has revealed how his boyfriend should conduct affairs with him.

The socialite took to his Instagram page to disclose that he would never bear ill feelings towards the wife of his boyfriend and that he will be the kind of side chick that will love his boyfriend's wife.

Bobrisky stated that the woman doesn’t need to know him, but he would never allow her husband hurt her.

Bobrisky revealed that , any married man he dates must be good and respectful to his wife or else he would have to dump him.

In his words; “I’m that side chick that love my boyfriend wife

She doesn’t need to know me but lowkey I won’t allow my man hurt her.

Any married man I’m dating must respect their wife