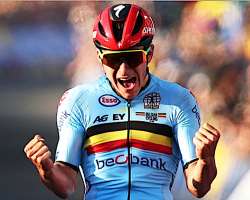 Remco Evenepoel took the stage by storm as he rode to victory at the world road race title on Sunday to claim a first rainbow jersey.

The Belgian finished 2min 21sec ahead of Frenchman Christophe Laporte after an epic 266.9 kilometre (165.4 miles) slog around the coastal city of Wollongong south of Sydney.

"After a long season it's amazing to finish like this. I'm super-happy I had the legs today, it's something I've been dreaming of," Evenpol said after his victory.

Already the winner of the Vuelta a Espana World Tour event in September, and Liege-Bastogne-Liege earlier in the year, his victory capped a massively successful season for Evenepoel.

The event concludes a nine-day championships which included junior, under-23s and senior races for both men and women, as well as a mixed-team event.