Says His Records In Anambra State Speaks For Him 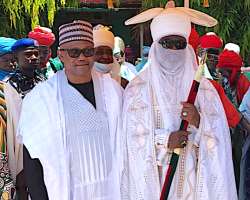 The Emir of Kano, Alhaji Aminu Ado Bayero, has hailed the Labour Party presidential candidate, Peter Obi, for his eloquence, calmness, humility, respect for culture, and fear of God.

He made the assertion on Saturday when Obi visited him in his palace in Kano where he expressed appreciation to the candidate for having respect for culture. According to him, the country is blessed with resources. He wondered why there was suffering, poverty and crime.

The Emir of Kano stated that he believed that Obi was eminently qualified for the position, as he did well as Anambra State Governor.

He wished Peter Obi well in the pursuit of his ambition. Speaking on the occasion, Mr Obi informed the Emir he was at his palace to pay homage and to sympathise with the Kano flood victims, as well as Beirut Road building collapse.

He hinted that he has been exposed to various areas of governance for years, and noted that he was experienced to lead Nigeria.

He, however, told the emir he was in the state for a sympathy visit. Obi said he deemed it appropriate to make the palace his first port of call. Obi also disclosed that the visit to the palace was to formally inform him of his intention to run for presidency in the coming election.

Peter Obi was accompanied by the Kano State gubernatorial candidate of the Labour Party, Bashir Ishaq Bashir, and his running mate Datti Yusuf Baba Ahmed, and leaders of the party in the state.