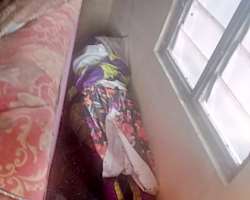 It was a spiteful scene at the family of Nnodu Igwebuogu Abụbọ Nnewi-Ichi, Nnewi, Anambra State, as two decomposing bodies of a couple were discovered in their room.

The Spokesperson of the Anambra State Police Command, DSP Ikenga Tochukwu disclosed this to newsmen on Friday.

According to him, the bodies were discovered at about 5:20pm on Thursday, with machete cuts on them.

While noting that the corpses have been deposited in a mortuary, he further revealed that the Commissioner of Police, who described the act as man's inhumanity to man, has directed that the case be transferred to State Criminal Investigation Department for discreet investigation. Although the identity of the suspect behind the murder is yet to be unravelled, a voiceover accompanying a video from the scene of the crime alleged that the couple were murdered by their only son, who is currently on the run.

It was gathered that the couple hailed from Nsukka, Enugu State but lived in Anambra State with their son, the suspected murderer, who was also said to be an undergraduate.