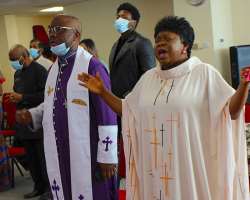 Topic: EYES HAS NOT SEEN BUT YOU CAN IMAGINE:

TEXT:1COR 2:9
But as it’s written,Eyes hath not seen,nor ear heard,neither have it entered into the heart of man,the things which God hath prepared for them that love him.

God is a God of purpose, he has great plans for his children, he cares, that’s why he said in jer 29:11 for i no the thoughts that i think toward you,saith the lord,thoughts of peace, and not of evil, to give you an expected end.Jesus said blessed are those that believe yet haven’t seen.the just shall live by faith,whatever your mind can’t picture will never be possible in your physical world.

TAKE NOTE OF THE FOLLOWING.
1.God will never do business with anyone that lacks faith,because the only currency for exchange in this kingdom is faith.

2.if you go through the early ministry of Jesus,it was surrounded with miracles Based on faith.

3.even the all powerful Jesus was limited in his own town by unbelief(lack of faith)he couldn’t performed great miracles.

4.according to Roman 4:17 he calleth those things which be not as though they were.

Faith is a function of the imagination of the mind,even when your eyes is yet to see them physically you can imagine them mentally.

in Conclusion:there’s nothing impossible with God and those that believe, because anything that come to reality on earth has existed in the supernatural or spirit relm before.so they are brought to existence first by imaginations,God told abraham as far as you can see(imagination of your mind) i will give unto you.he saw countless stars,no wonder he turned father of many nations.even in that terrible situations e.g maritally,ministerially, academically, financially and politically,if you can remove your eyes from seeing the circumstances and use the eyes of your mind (imagination)to see positive picture, everything will turn around for your good and testimony.

PRAYER:
1.father help me to always be positively oriented and not walk by sight in Jesus name, amen.

2.lord established my going and doing as i put my imagination to work in Jesus name, amen

Goodseed Daily Devotional is the publication of Apostle George Amadi- Senior Pastor Goodnews Bible Church London. If you are in the London area do worship with us at 2nd Floor Unit 4 Westmoreland House Scrubs Lane White City NW10 6RE