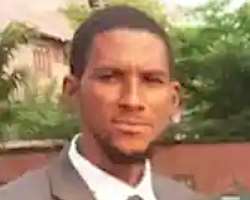 Richard Ngoyi, a reporter with legende.cd, was filming children and blind adults who were begging in the street in Kinshasa, when he was arrested on September 8, 2022. (Photo Credit: Rigobert Mukendi)
Listen to article

Kinshasa, September 15, 2022 – Authorities in the Democratic Republic of the Congo should cease arresting journalists for their work and ensure that all DRC media can work safely and free from harassment or the threat of prosecution, the Committee to Protect Journalists said Thursday.

On the morning of September 8, Ngoyi, a reporter with the privately owned news site legende.cd, was filming children and blind adults who were begging in the street in Kinshasa, the capital, when they started punching the journalist and accused him of denigrating them by publishing their images online, according to Ngoyi and legende.cd editor Rigober Mukendi, both of whom spoke to CPJ by phone.

Shortly after, two plainclothes intelligence agents and a police officer arrested Ngoyi, confiscated the phone he used to film, and detained him for five hours at the Kasa-Vubu municipality police station in Kinshasa, according to those sources and a report by privately owned news website Challengeinfo.net.

Ngoyi said he received treatment at a local hospital for a swollen left eye, adding that police retained his phone, insisting the journalist compensate the blind adults and children before it was returned.

“DRC authorities should focus on protecting journalists as they work to cover issues of public interest, not arresting them and threatening them with legal action,” said Muthoki Mumo, CPJ’s sub-Saharan Africa representative, from Nairobi. “There is no reason for journalists to be detained simply for doing their job.”

Mukendi said he went to the police station after learning of Ngoyi’s arrest, where a police officer and a judicial officer demanded payment of 1 million Congolese francs (US$500) to compensate the children and blind adults that Ngoyi filmed, Mukendi told CPJ, adding that the officers threatened to prosecute Ngoyi if payment wasn’t made.

Mukendi said he refused to pay, argued that Ngoyi committed no criminal or professional offense by filming the people on the street, and eventually convinced the officers to release Ngoyi.

The judicial police officer, who declined to give his name, told CPJ by phone that they arrested Ngoyi because he filmed children and blind adults without consent, and he was preparing to transfer Ngoyi’s case to the local prosecutor.