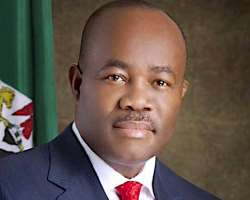 A Federal High Court sitting in Abuja has ordered the Independent National Electoral Commission (INEC) to recognise Godswill Akpabio as the candidate of the All Progressive Congress (APC) for the 2023 Akwa Ibom North/West Senatorial District election.

Justice Emeka Nwite, in a judgment delivered on Thursday, noted that INEC’s refusal to accept and publish Akpabio’s name was in contradiction with the law, having received the name from the APC as its valid candidate

Nwite, who said that the electoral umpire acted illegally, said the commission lacked power to have disqualified the 2nd plaintiff (Akpabio).

“I hereby declared that the defendant (INEC) publish the name of the 2nd plaintifff as the authentic candidate,” he said.

Recall that Udom Ekpoudom had emerged as the party’s candidate in the primary alleged to have been supervised by INEC officials in the constituency.

However, the party submitted the name of Akpabio in his place.

Meanwhile, INEC spokesperson, Festus Okoye, in an interview however, said that the commission rejected the former minister because he was not the validly nominated candidate for the senatorial district.