Senescent Tinubu Fitter For Rest Than For Presidency. 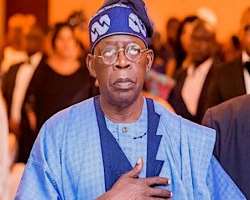 Since the former governor of Lagos State and Jagaban of Borgu, Asiwaju Bola Ahmed, declared his interest and began to pursue what he described as his "lifelong long ambition to become the president of the Nigerian nation", people have expressed concerns about his health condition. The yet to be resolved controversies surrounding Tinubu's age and academic history and qualifications, notwithstanding, he has been able to meander through the compromised Nigerian system to the point of succeeding in the screening of his political party, All Progressives Congress, APC; winning the presidential primaries; and becoming the presidential candidate of the APC. While it was possible to cover up issues about age, academic history and qualifications, the issues of health or physical and mental fitness have been thorny and unyielding to cover-up. Resolving these fitness queries has become the greatest challenge of the "Emi lo kan" presidential project; and it is so for obvious reasons arising from the experiences of the Nigerian citizenry over similar issues.

At this point, it is necessary to say that apart from unresolved allegations of corruption and manipulation of nativity, the Jagaban is one excellent Nigerian leader who has distinguished himself in areas of political will and human capital development. Jagaban is noted for goading his aides to achieve greatness in various fields and leadership circles. In fact, about 40% of the present crop of Southwest political elites are proteges of the Jagaban. For instance, the current Vice president of the Federal Republic of Nigeria, Prof. Yemi Osibanjo; the former governor of Osun State and serving minister for Interior, Ogbeni Rauf Aregbesola; the former governor of Lagos State and current minister for works, Babatunde Raji Fashola, S.A.N; the former Chairman of Federal Inland Revenue Service, FIRS, Chief Babatunde Fowler; among others passed through the tutelage of Tinubu. It is on record that in some cases, Tinubu recommended most of them for the various elective or appointive offices they respectively occupy.

It is instructive that the Tinubu presidential project was greatly threatened by the interest of the vice-president, Prof. Yemi Osibanjo, on the same presidency. Initially, some people saw Osibanjo's interest as a sundry ploy designed to mobilize more support for Tinubu. To those people, there was no way VP Osibanjo would contest the 2023 All Progressives Congress presidential ticket against his political master's interest. When the professor of law stuck to his guns till the APC presidential nominations, many labeled him an ingrate. However, Prof. Osibanjo was no ingrate. Rather, he was a patriot who loved both his country and his political benefactor and had to run for the presidential primaries because he knew that his benefactor would not be strong enough to go through the rigours of both the campaigns and superintending a country that is in need of not just a visionary leader, but also a leader who has both the intellectual and physical capacity to monitor and supervise the implementation of policies and programmes of his administration. These qualities, the VP knew, were insufficient in his benefactor, but not wanting to appear as denigrating his former principal and political godfather, Osibanjo offered himself in the hope that APC national delegates would inform Tinubu through their votes in the primaries that the godfather needed rest more than the tasking APC presidential ticket and the the Nigerian presidency. Even the APC national chairman, Aliyu Adamu, had unvoiced reservations which compelled his stillborn stunt against the Jagaban at the eve of the convention. Like Adamu, VP Osibanjo forgot that many Nigerians do not reckon well in the presence of bullion vans which Tinubu allegedly had. Tinubu won the APC presidential ticket inspite of his cognitive and physical falters while addressing APC national delegates.

The irony of Tinubu's choreographed victory at the APC presidential primaries is that it was at the same APC convention ground wherein Tinubu won the 2023 APC presidential ticket that he lost the 2023 presidential election! This is true because it was at that convention from which Tinubu came tops that symptoms suspected to be of senescence which were probably hidden from Nigerians openly manifested. From the convention ground, challenges bothering on simple physical and cognitive fitness like appearance as guest on 30 minute live television interview programmes, standing on feet to interact with people et cetera have been thrown at the Jagaban by his fellow 2023 presidential candidates and by sociopolitical developments in Nigeria, but he avoided all. Tinubu's proclivity to honour invitations to interactive events by proxy turns off Nigerians who are not enjoying their experiences under their current leader who, due to health challenges, has allegedly been administering the country by proxy. Consequently, Nigerians who feel the impact of the collapsing Nigerian system are not disposed to voting for an apparently senescent presidential candidate who finds it difficult to hold the microphone or adjust his overflowing "agbada" raiment. Nigerians wish that managers of the good Jagaban should summon courage to inform him that notwithstanding his formal fitness for the Nigerian presidency, he is actually fitter for deserved rest in both his present state and Nigerian situation.