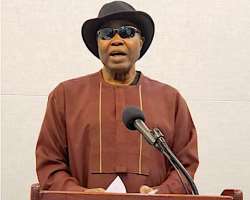 Washington DC, September 14, 2022: The influential US-based Nigerian watchdog, the Nigerian-American Coalition for Justice and Democracy (NACJD- the Coalition), has in a recent statement signed by her Chairman Professor Eddie Oparaoji and Secretary Mr Chijike Ndukwu, accused the Attorney General of Nigeria Mr Abubakar Malami of deliberately inserting a false statement into the political space with the intention to dampen, diminish and intimidate the Nigerian Diaspora from making contributions in support of their preferred 2023 presidential candidate, Mr Peter Obi, of the Labour Party. Following reports of commitment by the Nigerian Diaspora to crowd-fund Mr Obi’s campaign to the tune of $150 million, Malami said, “Any Nigerian who lives abroad, funding the campaign of Peter Obi shall be arrested. It is against our electoral laws”.Mr Malami lied and as the Nation’s top lawyer he knew he lied, and should be ashamed of himself, said the Coalition.

Barr Ogun further elucidated that, “INEC however has power under the Electoral Act to place limits on the amount of money that an individual either within or outside the country can contribute to a political candidate or political party by virtue of Sec. 87 of the Electoral Act.” He posited that in the recent past INEC has not exercised the power of this regulation. This, he said, calls for caution as INEC has the right and can exercise it, which if done, would be unconstitutional as the right to property is unfettered and a Constitutional right which is not subject to legal scrutiny.

The Coalition said “Malami deliberately lied about an unambiguous provision of the Law and should be ashamed of himself. This act, by the top Nation’s lawyer, who ought to be politically neutral, is tantamount to placing his thumb on the scale for the All Progressive Congress (APC) and Peoples Democratic Party (PDP). It is immoral, condemnable and enough to have him disbarred in saner climes.”

The NACJD is a Washington, DC, USA Research and Good Governance advocacy non-profit organization, that lobbies the US Government, the Congress, and the policy-making community to influence US policies on Nigeria.