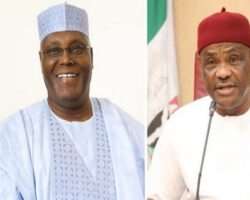 The governor said aggrieved party chieftains had demanded that the National Chairman, Senator Iyorchia Ayu, and not the Board of Trustees (BoT) chairman, Senator Walid Jibrin, should resign.

The governor also insisted that the presidential candidate, Atiku Abubakar, had confided in him after he picked the ticket that the national chairman would vacate the position.

However, Ayu survived the push for his resignation yesterday following a vote of confidence passed in him.

The change of baton in the BoT leadership was in response to complaints over the lopsidedness in the party's leadership structure.

The motion for the confidence vote in Ayu and the National Working Committee (NWC) was moved by the Minority Leader of the House of Representatives, Ndudi Elumelu.

It was seconded by Ishola Balogun Fulani, a member from Kwara State.

Elumelu premised the motion on the performance of the Ayu-led leadership in winning the last Osun State governorship election.

Ayu, who announced Jibrin's resignation at the NEC meeting, said the former BoT chair stepped down to enable him enjoy his “remaining leave”.

He said: “He has served us meritoriously over the years as a foundation member of the party. We want, on behalf of the party, to specialy thank him for all his services.”

The party chairman said there was harmony in the PDP, despite the protest.

However, it was gathered that members expressed worry over the lingering crisis in the party and urged speedy resolution of the contending issues.

The NEC was attended mainly by loyalists of the PDP presidential candidate. It was the same scenario at the National Caucus meeting on Wednesday night. Wike's supporters stayed away from the meetings.

Atiku urged members to be guided by the party's constitution in addressing issues.

He said: “Many speakers have alluded to family disagreement. Family disagreements are normal in normal families as well as political families. But what I can assure you is that we are determined to resolve those issues internally.

“Therefore, I wish to appeal to all members of our party to make sure that all our disagreements are resolved internally.”

Jibrin said he resigned to enable PDP and Atiku win the 2023 election.

He said: “All we want to achieve is that Atiku becomes the president of Nigeria by all means; that is why I decided that I, Senator Walid Jibril, am stepping down from the BoT.

Wabara, while accepting his appointment as BoT chair, cautioned against what he described as reckless statements by members.

“We should watch and control our utterances because by and large, only God knows tomorrow.

“Because once you voice out something, it is always difficult for you to pick back what you voice out. My advice to you is that we should be mature enough to control our temper.”

Atiku, Ayu arrogant, says Wike
Wike said Atiku and Ayu are arrogant because they had struck a deal with somebody in the Presidency.

He promised to disclose the identity of their contact person in the presidency at the appropriate time.

Wike, who spoke when he led Governor Makinde to inaugurate a new Faculty of Humanities, Rivers State University, Ahoada, said Atiku and Ayu may be disappointed in 2023.

He recalled that the same “presidential force” promised someone the presidential ticket of the All Progressives Congress (APC), but failed to actualise it.

The governor insisted that the deal was the main reason Atiku and Ayu had failed to honour their promises of restructuring the party ahead of the election.

Wike described the resignation of the BoT chairman as inconsequential to the battle of his camp for justice, equity and fairness.

He said Ayu must go, recalling the promises made by him to cede his position to the South if a Northerner emerged the candidate.

He said immediately he emerged candidate, Atiku visited him, solicited his support and promised that Ayu would resign in obedience to the party's constitution.

He said it had never happened in the history of the party that the national chairman and the candidate would come from the same zone.

The governor said he was fighting for the inclusion of the South in the affairs of the party, adding that the battle was not about his personal interests.

Wike said: “When we finished our convention on a Saturday to Sunday, the candidate of the party came to see me in my house in Abuja on Monday around 10 to 10:30am. The candidate told me: 'Listen, I want us to work together' and then, he said: 'Look, Ayu must go.'

“But I say 'why?' He said 'because when a candidate comes from the North, the chairman will come from the South.' And I am saying, implement what you told me. What offence have I committed? It has nothing to do with Wike; it has to do with integrity.

“I challenge the presidential candidate to deny this. If he denies it, I will go further to say many things to Nigerians because enough is enough. We can't continue this way.”

On Jibrin's resignation, Wike described the BoT as an advisory body that had no decision-making capacity.

He said: “They have today told the BoT Chairman to resign. Who is talking about chairman of BoT? What is the role of a BoT? It is an advisory body. We have never zoned BoT. It is not a decision-making body. Those who run the party as it is today is the presidential candidate and the chairman of a party.

“They will sit down and take decisions. The candidate is from the North, the chairman is from the North. Who will represent the South in decision making? It is not about me. They are flying propaganda. Will I be chairman of a party?

“All I am saying is that you can't take the two major positions of a party. You cannot do that and some psychophants do not understand.”

Describing Atiku and Ayu as arrogant, the governor said: “Why are they being so arrogant? I can tell you. They are arrogant because they believe somebody at the Presidency is backing them.

“I will continue to fight this fight. This injustice is enough; we cannot continue to swallow this. We are not looking for anything from anybody. God has said we will survive. Why will we be slaves?

“When the election is won, the chairman and the president will sit down and talk about who takes what and what goes where. They have already taken who will be Senate President. Which one have they given you? They want to take our votes. It is not possible.

“So, forget about those hungry people who will never be satisfied. Those are the people hanging out in Abuja begging to be included in the campaign council. We are talking about the structure of the country. How it should be.

“Why not do the right thing so that you can sleep well and wake up tomorrow?”

On the 17 governorship candidates who visited him recently, Wike said he presented the issues to them and they agreed that he was fighting a just cause.

He said: “When the guber candidates came to see me, I said 'what do you want me to do?' I am a member of the party. I will support my people to win election in Rivers State.

“Do you want me to accept that the candidate and the party chairman should come from the same zone? I asked them.

“You cannot disobey the constitution of your party because you claim you are in the majority and you come out and tell Nigerians you are speaking for their interest. You are a liar.

“What can they do to me now? Will they remove me as governor? Remove me if you have the power. Don't be afraid, this fight we will fight it to the end. Justice must be done. It is not about Wike but the survival of the PDP.”

Wike chided a former Niger State Governor Babangida Aliyu for saying that he (Wike) was on a mission to destroy the PDP because he lost the presidential primary.

Describing Aliyu's remarks as an insult, the governor recalled how the former Niger governor confessed that they plotted the defeat of Jonathan because they felt it was the turn of the North.

He said: “Some of you don't know what is happening in the country. You are being deceived.

“There is one empty barrel called Babangida Aliyu, who will come out on a national TV to say somebody is destroying the party because he didn't win the presidential primary. That is an insult.

“The same man is saying today that I am trying to destroy the party because I didn't win primary. For Christ sake, in a contest, there must be a winner and there must be a loser. I have no regrets.

“We contested the elections very well. We are not ashamed. If Aliyu knew he was important and strong he should have picked the forms so we deal with him.

“As a serving governor, he couldn't win his senatorial election. Imagine that I contested an election as a sitting governor and then, go and lose the election. You will know that something fundamentally is wrong with me. That means my people don't like me and that means I have never performed.

“Serving as a governor and losing senatorial election is a vote of no confidence and he doesn't understand that. And this is a man PDP is bringing on a national TV to campaign for PDP.

“Ask him when he was a governor, what were his legacy projects? How many people from this country came to inaugurate his projects? If I am coming today to campaign for my party, people will ask me what I did in my state as a governor.

“Ask Aliyu Babangida, show me your report card when he was a governor of Niger state. I have been to Niger and I asked people to show me what he did, but nothing. So, that is the man that will come out on a national TV to tell Nigerians whom to vote for.” (The Nation)