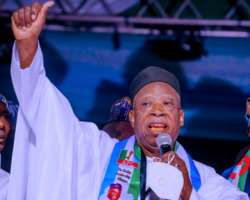 The 2023 Presidential Campaign Council for the All Progressives Congress (APC) has distanced itself from a list being circulated on social media and published by some online news platforms (The Nigerian Voice not included).

The purported list contained names of members of the council who would advance the campaign of the party's standard-bearer ahead of the forthcoming general election.

Reacting to the development, Mr Bayo Onanuga, Director of Media and Publicity of the council, said the list was not authorised and unofficial.

In a statement issued on Saturday in Abuja, Onanuga urged the public to disregard it, adding that the party’s leadership and its presidential candidate, Asiwaju Bola Tinubu would formally unveil the campaign council.

Onanuga who also said that the party understood the interest of the general public in the APC and its presidential candidate, urged the media to exercise restraint in disseminating information that were not correct.

Quoting the secretary of the APC presidential campaign council, Mr James Faleke, Onanuga said that the various directorates of the campaign structure were still being put together.

He said it was being done in consultation with the APC governors and other critical stakeholders.