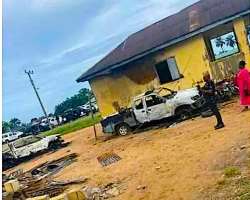 In addition to the killing, several damages where launched on Part of the Division, vehicles including the belongings of the Divisional Police Officer were burnt by the criminals.The invasion has however roused serious tension and panic in the area as natives and residents expressed shock and discomfort.

Sources in the community who do not want to be mentioned disclosed that they struck between 10pm and 11pm in three vehicles.

According to the sources, the gunmen came in a tipper vehicle and two Sienna cars and invaded the police division and also launched fierce shooting.

One of the source's statement read, “They came in a tipper and two Sienna vehicles shooting indiscriminately and we all ran into our houses.

“It was around 10pm and 11pm."
“It was this morning that we heard that they were criminals and they attacked the Police Division, killed four policemen and burnt vehicles there.”

Another source said he was in his house when he started hearing sounds of gunshots and he didn’t bother coming outside. He testified to the killing of four police officer and other persons.

He said: “I was already inside when I started hearing sounds of gunshots.

“I didn’t bother coming outside because it was safer to stay indoors than to come outside."

“It was this morning that we heard that the Agwa Divisional Police Headquarters was attacked. Four policemen were killed."

“Vehicles at the Division, including the one belonging to the DPO, were burnt.

“They also went to the house of an Okada man known as Ejike, shot him dead and shot his wife.His wife is alive.”

Another person said that his people were living in fear, calling on the government to rescue the situation.

He said: “We are living in fear. We don’t sleep with our eyes closed anymore. It is one problem or the other. We don’t even know the reason for this heinous crime.Two female police officers roasted and the two others killed in cold blood.This is anti-human.”