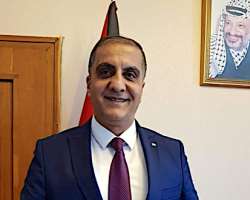 H.E. Dr. Ahmed Al Madbuh Ambassador Extraordinary and Plenipotentiary of the State of Palestine in the Republic Bulgaria and Dean of the Diplomatic corps
Listen to article

Dr. Ahmed Al Madbuh has been accredited as the Ambassador Extraordinary and Plenipotentiary of the State of Palestine to the Republic of Bulgaria since January 2009. He has been the longest-serving Dean of the Bulgarian diplomatic corps - since 2014 and has been the most active ambassador in country.

In the past 13 years, he has given countless interviews and lectures to the Bulgarian audience relating to the Middle East conflict, terrorism and international relations. His main effort as an Ambassador for his war torn county Palestine and also as the Dean of the entire diplomatic community has always been focused on promoting peace, unity and developing inter-cultural relationships between the nations represented in the host country.

At the end of his diplomatic term in Bulgaria I spoke with H.E. Dr. Ambassador Al Madbuh, here is what he shared with me exclusively for the readers of The Voice magazine Ambassador Al Madbuh and the President of Bulgaria Rumen Radev

TV: Please tell us about yourself and what made you become an ambassador?

Ambassador Al Madbuh: I could say that my destiny began as a refugee who passed through to become a surgeon, then later an ambassador. I was born in a refugee camp in Lebanon. The camp is geographically situated close to Palestine. I was born there because my parents as well as my grandparents were forcibly driven out of Haifa. They fled and sought refuge in this camp. I studied in the schools of the United Nations Relief and Works Agency for Palestine refugees - UNRWA. After that, I did my medical degree in Russia and subsequently specialized in urological surgery. During my entire time in Russia, my work was accompanied by the ongoing battle for the Palestinian cause. When I was approached with the offer to become an ambassador, I spoke with my father who asked me “What was your response?” I told him that I replied - “I will think about it”. He responded, “What’s there to think about?”. So I called and accepted the offer. Subsequently, I became an Ambassador of the State of Palestine to Bulgaria since 2009, TV: Being the Dean of the diplomatic corps how were you able to successfully manage Ambassadors from different countries with different political views and cultures? TV: How do you think we can achieve a peaceful resolution to the Middle East conflict and the crisis in Eastern Europe?

Ambassador Al Madbuh: Without a doubt, peace is what everyone wants! To achieve peace, courage and political will power is required. Regarding the Middle East conflict with the Palestine problem being the heart of it, we the Palestinian people and the Palestinian leadership took our course on the path of peace since 1988, since the boundaries of the State of Palestine were established in 1967 with East Jerusalem as the capital. This is also within the internationally legally declared Occupied Territories, the West Bank of the river Jordan, East Jerusalem, and the Gaza Strip. We accepted and agreed for our country to be established within those boundaries on the said territory, sadly there hasn’t been an Israeli government to reach out their hand in peace based on International law rights mentioned. The war in 1967 lasted only 6 days. It is referred to as the “Six-Day War”. In six days, Israel occupied whatever was left of the Palestinian territories. So should the Israeli government find good political will for a peaceful resolution, they would have in the same manner withdrawn from the Occupied Territories in six days, and on the seventh day, we could both rest. Unfortunately, as I already said, there is no will or desire for peace on the Israeli side. Achieving a peaceful resolution could only be accomplished on the basis of international law. And international law states that the Palestinian territories are occupied territories from which Israel must withdraw. In addition, based on the same international law, the Palestinian refugees have the right to return to the places from which they were forcefully driven out. This means that as per international law, I have the right to return to Haifa, the place from which my grandparents and parents were forcefully expelled from. Till this moment, Israel refuses us to exercise our rights. We would like peace to be established in Ukraine where there is an ongoing war because peace cannot be achieved in any other way but at the discussion table. The sooner discussions are held; the sooner peace is going to be by established. If we are to run a parallel comparison between the ongoing war in Ukraine and the war in the occupied Palestine, we will establish the presence of a double standard with regards to the international relations conduct towards Ukraine. We saw how the United States and their allies, including the European Union imposed strict sanctions on Russia because of the war in Ukraine. If only 10% of those sanctions were imposed on Israel, the chances of achieving a peaceful resolution to the Middle Eastern conflict would have increased to 90%. Looking at Israel, we see that recently two reputable International institutions, Human Rights Watch and Amnesty International published independent reports that concludes, that Israel is a country that exercises apartheid towards the Palestinians. Sadly it appears that the democratic world seem to turn their eyes away from those two reports, not noticing them and ignoring them. When apartheid was exercised in South Africa, the world imposed sanctions which abolished the apartheid regime in South Africa. Why is the same sanctions are not being brought upon Israel so that the apartheid regime that Israel exercises could be brought to an end? TV: During your 13-year mandate, what bilateral relations were achieved between Bulgaria and Palestine and what future cooperation would you recommend?

Ambassador Al Madbuh: During my mandate, we worked on strengthening the bilateral relations with Bulgaria. We entered into multiple bilateral agreements in the areas of tourism, labour and social policies. In foreign affairs activities, few political consultations were held between the two Ministries. There was exchange of visits at the highest level between the two countries and at all times we strived for our relations to maintain the highest level, not only politically but also in the inter cultural aspect between our two Nations. There were cultural exchanges between artists and performers from Bulgaria and Palestine, we organised numerous exhibitions in various Bulgarian towns, participations in folk festivals and the most significant achievement was the establishing of the Asian Festival together with the Ambassador of Indonesia. That event has now transformed into to a significant cultural event in the program of Sofia, the capital of Bulgaria H.E. Dr. Ahmed Al Madbuh Ambassador Extraordinary and Plenipotentiary of the State of Palestine in the Republic Bulgaria and Dean of the Diplomatic corps

TV: What is the best that you would recommend about Bulgaria?

Ambassador Al Madbuh: Bulgaria is a very beautiful country. By that, am not only referring its nature but to its people who are friendly, helpful and willing to co-operate. Foreigners are made to feel so welcome in Bulgaria that they feel as if they are in their own country. This is a very specific trait of the Bulgarian people. Bulgaria has a very diversified nature, I would recommend for all to experience the beauty of the Bulgarian nature. Each visitor to Bulgaria must go to the Black Sea side. For me, the Bulgarian coastline with its golden sand is one of the most beautiful sea sides in the world. Everyone must visit the green mountains as Vitosha, the Rila Mountain with its seven mountain lakes. The ski resorts, as well as the ancient villages and towns which have retained their authentic charm and traditions, as Etara, Bojentsi and the old beautiful capital of Veliko Tarnovo. In those places, one can see the restored old authentic houses and familiarise themselves with the Bulgarian history and the Bulgarian spirit. I am not able to mention all the places that represent the beauty of Bulgaria, but these are some examples of the places that should be visited.

TV: And finally what is your personal message to The Voice news magazine readers?

Ambassador Al Madbuh: In my opinion, a spirit of co-operation should be established between all people, with no room for discrimination in any shape or form. As all of us are born free and need to remain free, we are all equal; no one is or should be above the rest. Should this principle be applied, there will be no more Wars. Life is short and should be used for good deeds.