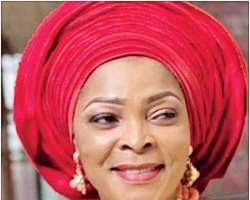 The factional All Progressive Congress Senatorial candidate for Ebonyi South Zone, Princess Ann Agom-Eze, on Sunday, said she stayed off the ordered fresh primary of the party in the zone, because there was an appeal for stay on execution on the matter.

This was as she said she could not be part of a 'premeditated' exercise, which according to her, would be marred with irregularities.

She stated this in a statement, on Sunday.
According to her, "Waking up this morning I was going through my messages and I stumbled where someone was talking about primaries at Afikpo.

"I am not going to be part of it because the authentic Ebonyi South Senatorial primaries happened on the 28/5/2022 and it is still subsisting. This is because the judgment delivered at the Federal High court Abakaliki on the 22/7/2022 was not totally in our favour and we had to appeal the part of the judgment that allowed for fresh primaries to accommodate strangers to the process since 26/07/2022. We also filed a motion for stay of execution and injunction pending appeal.

"I believe there should be no other primary as the matter is sub-judiced and the rule is that all the parties must stay actions on the matter. We also wrote letters to INEC and our great party urging them to observe the rules of les pendis.

"Am looking forward to the judgment of the Court of Appeal as a law abiding citizen of the Federal Republic of Nigeria and I am confident that the court will do justice."

Recall that a Federal High Court, had, penultimate Friday, disqualified Ebonyi State Governor, David Umahi, and averred that Agom-Eze, who was the second runner-up in the May 28, 2022, senatorial primaries, be allowed to contest the 2023 senatorial election.

Consequently, a document signed by the APC Chairman in the state, Chief Stanley Okoro-Emegha, had stated that the party would hold the ordered fresh primaries, on Sunday, July 31, 2022.