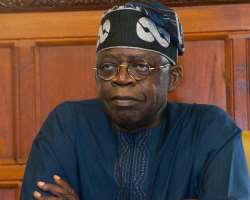 Dear Asiwaju, I believe by now, if anyone tells you you're going to win the 2023 election effortlessly, you would fix the person with a scornful look and probably bury your hand in his face in strike of a feral slap. With his gross incompetence, the Buhari you shoved down our throats has wrecked havoc on Nigeria, while you're acting unconcerned.

Dear Jagaban, as a frontline patriot, you had promised that Buhari's experience as a military leader would easily combat Nigeria's insecurity. Unfortunately, his nepotism in selecting the top brass across the military parastatals has done us great harm. The man you whitewashed to Nigerians has set insecurity at its most alarming rate. We are now the sixth most terrorised nation in the world. People get killed and kidnapped on a daily basis; bandits still decide the peaceful days for Nigerians.

While canvassing for votes, you promised Nigerians that economic hardship would be unfound with the emergence of your incompetent Daura friend. Baba Seyi, while you are here, a dollar is now 710 Naira at the parallel market. Recently, we handed the award of the "capital for world poverty" to India, even though India is six times more populated than we are.

The anti-corruption crusade you and your party men canvassed with, is nothing to write home about. With ten fingers, our national cake is still being eaten by the top men at the helm of Nigeria's affairs. Do I even talk about university students who have been sitting at home for over four months because of the lingering ASUU strike, or their junior ones in private primary and secondary schools whose schools are now shutting down for fear of attacks by bandits?

Asiwaju, you are in the know of all these and still tells us you will "continue from where Buhari stopped"? From where, Jagaban? From where? Was that an insensitive statement to get the support of the president, who you claimed did not want you as his successor, or do you really want to continue with the hardship Buhari has inflicted on Nigerians?

The APC has done great harm to Nigeria already, Asiwaju. It has failed in all its promises to Nigerians. The top three promises: insecurity, economy and anti-corruption were mere empty promises from your mealy-mouthed man.

Dear Bola, the hearts of Nigeria have welled up in so much sorrow. Their tears have been so heavily provoked that even Nigerians who have never voted in their entire existence have defied all odds to register for their PVCs and patiently waiting to cast votes, mostly not in support of the two big wigs. Asiwaju, this is what APC has done to Nigeria, that any voice from the party is now a voice of mosquito which Nigerians do not want to hear.

Dear Tinubu, if you really mean well for Nigeria, my biggest hope is that you succeed in the forthcoming presidential election. If otherwise, I hope you rescind your decision now for the sake of man and posterity. Because, as it stands, it seems no good bullet would come from the gun of APC.