A National Embarrassment: The Shootout Between Members Of NDLEA And NURTW In Osun 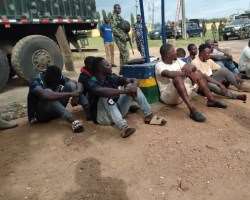 A group known as the Advocacy Network on Religious and Cultural Coexistence (ANORACC) has condemned the faceoff that was reported in national dailies on July 28, 2022, between operatives of the National Drug Law Enforcement Agency (NDLEA) and members of the National Union of Road Transport Workers (NURTW) in Osogbo, the capital of Osun State.

The President of the Non-governmental Organisation, Odimegwu Onwumere, speaking in Port Harcourt, said the shootout which the two groups engaged in was an embarrassment to humanity.

The ANORACC said it wondered where the NURTW got their guns from with which they engaged the NDLEA in a shootout which was learnt to have occurred around 2 pm that day, leading to residents around the Old Garage area via Rasco scampering for safety.

"We condemn what happened at the park in Osun between the operatives of NDLEA and members of the NURTW. In modern civilisations, government security operatives hardly place their hands on triggers, but this is not the same with Nigerian security outfits as reports of stray bullets in our news space are defeaning," Onwumere said.

He added that except the motor park had security officials guiding it, he wondered where guns came from with which members of the NURTW engaged the operatives of the NDLEA; but even at that, there was no need for the said shootout.

The group said that with the reports from the Chairman of NURTW unit, Oyewale Kazeem, confirming to newsmen that his men resisted the NDLEA operatives after they injured four people while they attempted to arrest a driver they suspected to be carrying drugs, it was like a war thorn area with the Director of Media and Advocacy for NDLEA, Femi Babafemi, also disclosing that four people were injured while their officers were trying to arrest a driver carrying drugs.

The ANORACC therefore sued for peace and a thorough investigation into the matter because of the hyper-agitated situation the country was already facing.

"To prevent similar tragedies in the future, we urge the authorities to conduct a comprehensive investigation. No region of the country needs anarchy brought on by a tense nation. There is no reason for any portion of humanity to become anxious and upset. All parties must work together for the establishment of peace.