AHRC Calls For Israeli Accountability For The Killing Of Reporter Shireen Abu Akleh: 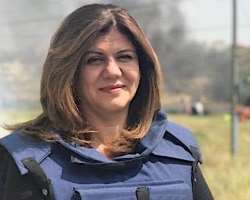 The American Human Rights Council (AHRC-USA) joins the human rights community and all peace-loving people in the US and abroad in expressing deep disappointment and disapproval of the State Department’s statement regarding the murder of Palestinian American journalist Shireen Abu Akleh by an Israeli military sniper.

Ms. Abu Akleh served as an Al Jazeera correspondent for 25 years. Her killing is another violation of international law and a blatant violation of human rights. Her killing was not the first of a Palestinian reporter by an Israeli soldier. We have no reason to believe it will be the last.

The US State Department’s statement that the bullet that killed Abu Akilah was “likely coming from the Israeli side” is a letdown. Palestinians and the human rights community were hoping that the US investigation would be objective and transparent, holding Israel accountable, with no equivocation for political expediency.

Abu Akleh’s killing was intentional. She was merely doing her job. She wore the proper insignia and helmet. She was known to the Israeli soldiers. There is no ambiguity here. It is not an issue of likelihood and probability.

“We were promised, and we expected the Biden administration to be more consistent on the issue of human rights,” said Imad Hamad. “There should be no Israel exception as to human rights and international law,” added Hamad.