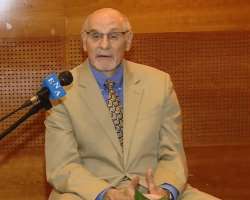 The ethnic national militias manipulated by dark forces from outside and inside the country want to make sure that Ethiopia is permanently destabilized, an American political-economic analyst told ENA.

Lawrence Freeman strongly argues that the recent massacre against civilians in the Oromia region is a result of ethnic polarization used as a weapon by people inside Ethiopia, governments outside the country, and intentional forces.

“The massacre that occurred against the Amhara in Oromia (Region) is committed by ethnic national groups manipulated from outside of the country and inside the country by dark forces that want to make sure that Ethiopia is permanently destabilized,” the analyst noted.

According to him, the dark forces outside of Ethiopia and inside the country which do not want to see a stable, prosperous, and sovereign Ethiopia have exploited this.

The analyst contends that as a result of a project to destabilize Ethiopia, ethnicity is being manipulated in Ethiopia “because there are political forces that want to weaken Ethiopia and you should not discount the fact,” Freeman pointed out.

Asked about the recent attacks in Wollega against civilians by militias, he responded that foreign forces are using these militias to destabilize the nation.

Given the perspective regarding the recent ethnic-nationalist forces that are being supported by outside and inside enemies of Ethiopia to threaten the country, the analyst pointed out that the third-filling of the Grand Ethiopian Renaissance Dam (GERD) could be an immediate cause.

“Within weeks ahead, it is going to be the third filling of the Grand Renaissance Dam, which has been opposed not just by Egypt and Sudan but also by the West. This dam produces electricity and could become a game-changer in the Horn of Africa and some people don’t want that to happen. If you have people fighting each other and constant internal conflict, then you have an unstable government that can easily be manipulated for outside political purposes.”

Speaking on the commitment of the Ethiopian government to peace and to solve the conflict in northern Ethiopia, the analyst is doubtful about the seriousness of the terrorist TPLF which demands concessions.

He blamed Western nations and media outlets for their failure to support the government from the outset. They instead supported the TPLF.

He further stated that there is also a belief among the people that those powers might have changed their position now to having a weakened government in Ethiopia.

The ethnic-nationalist terrorists and militia like the OLF-Shene and TPLF are now carrying out these attacks and disruptions which are all intended to weaken the nation-state of Ethiopia, Freeman elaborated.

Ethiopia’s leadership needs to embark on a process, actual discussion on the cultural-political history of Ethiopia and what the nation-state means to citizens of Ethiopia, the analyst recommended.

Freeman explained that it is because right now there has been an eruption of conflicts going on between extremists and various militias based on ethnic identity.

As a strong nation-state is now essential for the continuation of Ethiopian society and its economic development for generations, the government needs to have a much broader approach to this dialogue conception.

“First, people are going to have to discuss the difference between an ethnic grouping and the citizens of the nation. They are fundamentally different since there’s no equality between the ever. The discussion has to be also held throughout the country. The second thing is to unite the people. Ethiopia has a mission for its nation. That would unite people together.”

In his statement about the attack in western Ethiopia, Prime Minister Abiy Ahmed said on Tuesday that there is zero-tolerance for horrific acts claiming lives recently in both Benishangul Gumuz and Oromia regions by elements whose main objective is to terrorize communities.

Earlier he told the House of People’s Representatives that his government “wants peace with everyone” and revealed for the first time that “a study committee” has been formed under the leadership of Deputy Prime Minister and Foreign Minister Demeke Mekonnen.Tags: Lawrence Freeman)

Watch excerpts of my video interview below on Addis Media Network

Lawrence Freeman is a Political-Economic Analyst for Africa, who has been involved in economic development policies for Africa for over 30 years. He is a teacher, writer, public speaker, and consultant on Africa. He is also the creator of the blog: lawrencefreemanafricaandtheworld.com. Mr. Freeman’s stated personal mission is; to eliminate poverty and hunger in Africa by applying the scientific economic principles of Alexander Hamilton.