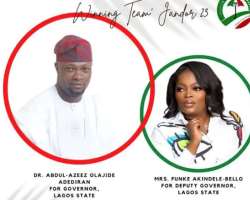 A top party's chieftain has disclosed that the governorship candidate of the Peoples Democratic Party, PDP, in Lagos State, Dr. Olajide Adeniran, popularly known as Jandor, may pick Nollywood actress, Funke Akindele, as his running mate.

The reliable source frankly said Jandor settled for Funke Akindele after unveiling her to party chieftains at a meeting held in Lagos, adding that Jandor refused the choice of Gbadebo Rhodes-Vivour to be his running mate.

According to the source, “He (Jandor) introduced her before elders of the party and local government chairman this week.

“You know, this thing has limitation because of the new Electoral Act (amended) which says the candidate has the right to choose his running mate, but he must consult with leaders and elders of the party.

“Since he refused the choice of Rhodes-Vivour, there is nothing we can do about it. He has since settled for Funke Akindele.

“I have never heard of her, but she was presented before the elders of the party. I understand she is a lawyer and an actress.

“The candidate will announce the choice of Funke Akindele soon,” the source disclosed.