Next Nigeria's President Must Come From The South, Ayodele Fayose Declares 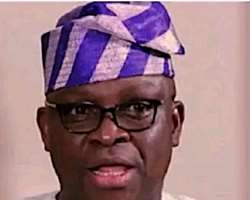 The former Governor of Ekiti State and Peoples Democratic Party's chieftain, Ayodele Fayose, has declared for southern presidency in the forthcoming 2023 election.

Fayose made this disclosure in a tweet on his verified handle on Wednesday.

He said, “The current President of Nigeria is a two-term northern Presidency, thus implying that it must be a southern Presidency in 2023 or nothing.”

This is contrary as his party, the Peoples Democratic Party, fields a northerner in the person of former Vice President Atiku Abubakar as its flagbearer for the 2023 presidential election.