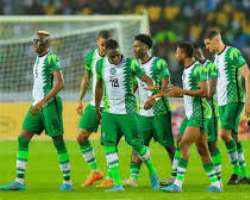 FIFA, the world’s top football governing body, has released itsranking for June , with the Super Eagles now ranked fourth on the continent and 31st on the planet.

The three time AFCON winner were previously ranked 30th globally and third in Africa, behind only top-ranking Senegal and second-place Morocco.

But the Super Eagles dropped a step down to make room for Tunisia, the Carthage Eagles now 30th in the world and third on the continent. Cameroon’s Indomitable Lions complete the top five ranking teams in Africa.

The Super Eagles defeated Sierra Leone 2-1 in Abuja to kickoff the 2023 Africa Cup of Nations qualifying campaign on a winning note.

Napoli’s Victor Osimhen then scored four to power the Jose Peseiro-led team to a historic 10-0 win over Sao Tome and Principe in Morocco four days later.

The three-time Afcon champions lost to both Mexico (2-1) and Ecuador (1-0) in the United States.

Elsewhere, former world champions Brazil retain their place at the top of the standings, having replaced Belgium in March.

Belgium, Argentina, France, and England make up the top five.