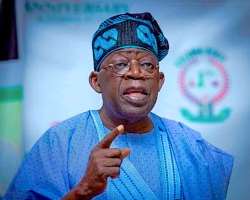 The attention of Ohanaeze Ndigbo Worldwide has been drawn to the news making the rounds with a caption “Ohanaeze Ndigbo dumps Peter Obi, declares support for Tinubu”. The story added that “since the group was in support of a second term for Governor Babajide Sanwo-Olu of Lagos State, there was nothing wrong in supporting his (Sanwo-Olu) presidential candidate” The purveyor of the above remarks is Chief Solomon Aguene, the immediate past president of Ohanaeze Ndigbo Worldwide, Lagos State Chapter.

For purpose of clarity, Chief Solomon Ogbonna Aguene was elected the President of Ohanaeze Ndigbo, Lagos state chapter in June 2018 for a four year tenure, in line with the constitution of Ohanaeze Ndigbo. Towards the end of 2021, information reached the National headquarters of Ohanaeze that Aguene was plotting a tenure elongation. Several eminent Igbo dignitaries urged Aguene to rescind the contemplation for an obnoxious tenure elongation and rather lend support for a fresh election for a new executive.

In line with the constitution of the apex Igbo socio-cultural body, an electoral panel headed by a seasoned technocrat in the person of Nze Ozichukwu Chukwu was constituted by the President General of Ohanaeze Ndigbo, Ambassador Professor George Obiozor, with a mandate to conduct a fresh election for the Lagos state chapter.

Subsequently, on June 15, 2022, an election was held in which over 750 delegates from seven Ohanaeze states participated. The election was observed by the Secretary General of Ohanaeze Ndigbo, Ambassador Okey Emuchay, MFR; Prince Gary Igariwey, the former President General; the Chairman of the electoral panel, Nze Ozichukwu Chukwu, Comrade Okey Nwankwo, the President of Abia State Chapter of Ohanaeze, among others. At the end of the stiffly contested election, Chief Sunday Ossai was declared the winner with 380 votes, while the runner up, Chief Evaristus Ozonweke scored 339 votes.

Information reaching Ohanaeze Ndigbo indicates that Aguene has secured a tenure elongation from a Lagos court. This is to say the least very deplorable.

Ohanaeze Ndigbo therefore informs the general public that the current president of Ohanaeze Ndigbo, Lagos State Chapter is Chief Sunday Ossai and only the Chapter President or an authorised officer of the current Lagos state executive has the right to speak on behalf of Ohanaeze Ndigbo, Lagos State Chapter. The general public is requested to disregard reckless statements by impostors, charlatans, unscrupulous social climbers and pretenders whose major objective is both mischievous and shady.

Ohanaeze believes that any person with a democracy credential will dissociate self with a person whose public conduct is at variance with democratic norms; and that the Aguene endorsement to a presidential candidate is hollow. It is therefore emphasized that the person who has the right and mandate to make statements on behalf of Ohanaeze Ndigbo in Lagos is the President, Chief Sunday Ossai.

For the avoidance of doubt, the misleading impression that “Ohanaeze dumps Obi” is from the pit of hell and meant to serve private interest. Such a statement is hereby vehemently debunked.