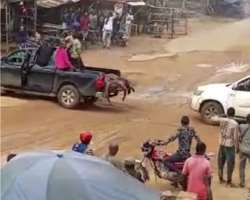 The Anambra State Police Command has cleared the air over the trending online video where groups of armed men were seen parading themselves and some fresh corpses in their vehicles in Ihiala Community.

Recall that an amateur video surfaced and went viral on Friday, showing a convoy of about four SUV and Hilux vehicles occupied by heavily-armed men and laden with some corpses of those purportedly killed by them.

The men were also releasing some bullets into the air, as they patrolled round the streets of Ihiala town with the copses in their vehicles, while some residents were seen hailing and cheering them up.

Some unfounded publications, however, emerged from the video, alleging that the armed men in the vehicles were Unknown Gunmen, while the corpses they carried were those of security officials they killed at a burial in Ihiala.

Debunking the reports, the Spokesperson of the Anambra State Police Command, DSP Ikenga Tochukwu said no single security official was involved in the video, whether as one of the patrolling armed men or their victims.

He explained that the armed men in the video were members of a gang who had a clash with other members of another gang in Ihiala and killed some of them, including one Innocent Obieke (popularly known as Double Lion), whom, he said, had been on police wanted list, as he had featured in attacks on police formations, military locations and other government infrastructures in the state. He said Double Lion, who belonged to one of criminal gangs, was killed alongside three other members of his gang during the clash.

Ikenga, however, said Police patrol has been intensified in the area, while the situation is also currently being monitored.

He said: “The Anambra State Police Command has reinforced Ihiala and its environs following a trending video of SUV’s and Hilux vehicles carrying young men that are welding arms to a yet unidentified location.

“Information from eyewitness account shows that violent clash ensued between two criminal gangs, and further details confirmed the killing of one Innocent Obieke (a.k.a. Double Lion) and three others. Double lion had been on police wanted list and had featured in attacks on police formations, military locations and other government infrastructure.

“Meanwhile, Police patrol is ongoing in the area and the situation is being monitored.”

A source in the area, however, disclosed that the incident happened at in Akwa Village in Ihiala, and further revealed that the clash was between the Unknown Gunmen terrorizing the state and the members of the Indigenous People of Biafra (IPoB).

The source said: “It is true. The incident happened at Akwa village in Ihiala during a clash between IPOB and unknown gunmen.

“The gunmen have a camp at a place called Oseakwa from where they have been terrorizing Ihiala, Okija, Uli and other neighbouring communities.

“For some time, the gunmen have been disrupting burials and demanding to be settled before any ceremony is organized. They are also the group that has been kidnapping people and snatching cars.

“On June 17, IPOB swooped on the gunmen in their camp and five people were killed during the shootout. IPOB operatives loaded the corpses in a Hilux van and paraded them around the villages.”