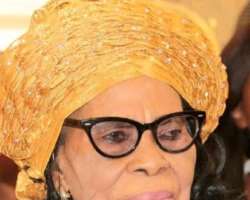 The late Princess Obaigbena, a retired Nursing Officer in the old Bendel State Government and Special Adviser to three different governors in Delta State, whose death was confirmed by the Royal family of Owa Kingdom of Delta State, passed on at the age of 88.

In his condolence message, Governor Soludo described Princess Obaigbena’s death as a huge blow to the Owa Kingdom, Delta State and Nigeria at large, coming at a time that her wise counsel was needed most.

He described the late matriarch as a real mother, a great woman of substance and committed patriot who gave all within her reach to the development of her immediate community and Delta State

He enjoined the Obaigbena family to bear the loss with fortitude, knowing that the departed amazon left great marks in her life time.

“On behalf of my family and the good people of Anambra State, I commiserate with my brother, the Chairman of the THISDAY Newspapers and Arise TV Group, Prince Nduka Obaigbena, the entire Obaigbena family and Owa Kingdom of Delta State on the passage of their dear mother, Princess Margaret Obaigbena.

“No doubt the death of a loved one, as in this case, is usually painful, especially coming at a time that her wise counsel is needed most in charting a new course for the nation. We are however consoled with the fact that she lived a worthy and examplary life to her immediate community and the country at large.

“Her glorious career as a Nursing Officer in the old Bendel State Government and passionate service in different capacities as Special Adviser to three different governors in Delta State, count among her litany of commitments to the good of her society. She lived a life of great accomplishments and left indelible footprints in her family, Owa Kingdom and Delta State.

“I pray that God will grant the late Princess Margaret Obaigbena eternal rest and grant the family and associates the fortitude to bear the irreparable loss”. Governor Soludo concluded