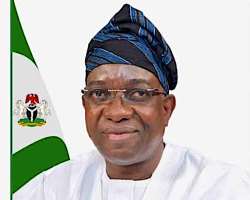 No fewer than 24 members of the Oyo State House of Assembly have signed a petition calling for the removal of Oyo State Deputy Governor, Rauf Olaniyan.

Out of the 32 members of the State legislature, the petition was signed by twenty-four lawmakers of which are PDP members.

The petition against Olaniyan which was read during plenary on Wednesday, accused the deputy governor of gross misconduct, abuse of office, financial recklessness, abandonment of office and official duties, insubordination and other offences.

The petition was read by the Clerk of the House, Yetunde Awe.

The Speaker of the House, Adebo Ogundoyin, said the petition met the two-thirds requirements to initiate the impeachment process.

He said the House would give the deputy governor a seven-day grace period to respond to the allegations raised against him. The seven days would expire on June 22.

Ogundoyin stated that failure to do so could lead to the commencement of his removal process.