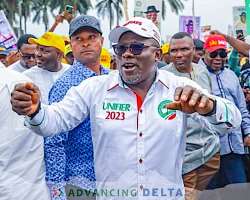 The Federal High Court has said Oborevwori Francis Sheriff Orohwedor has a case to answer in a suit filed by Olorogun David Edevbie challenging his emergence as the Delta State Peoples Democratic Party (PDP) flag bearer for the 2023 Governorship election.

Recall that ahead of the Delta State PDP Governorship primary, Oborevwori was hit by several scandals on irregularities surrounding his identity, age and credentials but the party went ahead to clear him for the contest against wide public outcry. This is also besides several violations of the PDP constitution in the process of the state congress.

Following these infractions, David Edevbie approached the court for an interim injunction restraining the PDP from forwarding Oborevwori's name to the Independent National Electoral Commission (INEC) and also restraining the INEC from receiving or recognising him as duly nominated as the party's flag bearer.

The suit also sought to restrain Oborevwori from parading or carrying himself as the candidate of the PDP for the election.

Sitting in the Abuja Division of the Federal High Court on June 14, Justice Taiwo O. Taiwo accordingly ordered that Oborevwori must file a defence within seven days to show cause why the prayers sought should not be granted.

The court also granted Edevbie's prayers for a substituted service, by way of a publication in a national newspaper, to the first defendant, Mr Oborevwori and further ordered that parties are not to do anything that will affect the reliefs sought till after the hearing.

Further hearing for the case has been fixed for June 22.