Ebonyi Pdp And 2023 General Election: The Truth They Are Hiding. 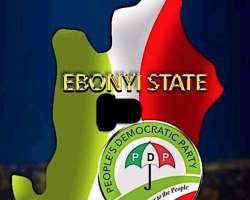 Ebonyi State has been a PDP State since the return of democracy in 1999. The misadventure of Governor David Umahi into the All Progressives Congress (APC) in 2020 could not and did not change that. Even though Umahi is in pains over his humiliation by the APC, he lacks the courage to return to the PDP which made him who he is today. His misfortune in APC goes to affirm the age-long saying that karma knows everyone's address.

The problem of the PDP in Ebonyi today is insincerity, ego, selfish interest, lack of trust and pathological prejudices against majority groups who must not be allowed to taste power in Ebonyi State. When Umahi left PDP in 2020, the political office-holders under the PDP umbrella refused to join him. That refusal strengthened the confidence of the teeming members of PDP to stand strong in the face of the intimidation and threat launched against them. Those holding public offices on the platform of the party came together to fund the party and sustain the structure.

At the time of congress, the funders of the party shared positions to themselves from ward level to state. It was easy to identify who has State Party Chairman and other positions in the State Working Committee. SWC members were loyal to those who sponsored them and not to the party. It was easy to notice, as in the cases of most of the SWC members of the party, how loyalty can be switched to the highest bidder.

During party primaries, it was difficult to harmonize the different interests of PDP leaders for the common interest of the party. It was that lack of cohesion that Mr. Ifeanyi Odii exploited using his resources. Someone who should be seeking membership revalidation suddenly became the leading force in the party. He stood by Silas Onu and took over the party structure through the instrumentality of the court and the collaboration of key members of PDP NWC. The supposed leaders of the party in Ebonyi State were put on defence. Yet, their lack of trust in one another and hatred for some groups in the state did not allow them to align properly and challenge Odii. Some of the leaders had to join Odii to guarantee their return to the National Assembly. When the table appeared to be turning against Odii, they returned to the other group hoping to benefit from both ways. Anyichucks outsmarted them; and used the court to sanctify his delegates list and compel PDP to respect the order. Odii and his group won in PDP primaries held on 28th and 29th May, 2022 while their rivals were deceived by PDP NWC to boycott the primaries. PDP leaders in Ebonyi State protested to the same NWC which aided Odii in his game. The supposed meeting produced the consolation that previous primaries were cancelled by the party on grounds of non-compliance with party guidelines; and fresh primaries were thereafter scheduled.

Anyim and Egwu bared their prejudices in the governorship primary puportedly held at Ebonyi State PDP Secretariat on 5th June 2022 when they declared that they did not want any Ezza or Izzi candidate to win the primary election. They gave directives to foot soldiers not to allow delegates defy their order as was the case in Ebonyi South. The governorship primary was projected in favour of Hon. Anayo Edwin of Ebonyi Central or Chief Fidelis Nwankwo of Ebonyi North. Anyim and Egwu who had aborted the guber project of an Ezza man in 2003 insisted that it must be Sen. Obinna Ogba. Those who witnessed the governorship primary would tell the story better. Barely 24 hours after the primary, the FHC Abakaliki set it aside based on a legal encumbrance which seem to have been deliberately created by the PDP NWC; and compelled the recognition of Odii and his group as the authentic holders of PDP tickets. It is trite that political parties' submissions into INEC candidate portals are subject to court scrutiny. We have seen those serving in elected offices dethroned by courts and replaced by others.

The problem in Ebonyi PDP is a self-inflicted injury. One cannot hate any part of his body and function properly neither can anyone clap with one hand. The next governor of Ebonyi State will come from Ebonyi South if PDP wins the election. The decision of FHC Abakaliki will be extremely difficult to set aside, and as long as it is not set aside and Ifeanyi Odii continues to be the candidate of the party as he currently is, it is only sincere reconciliation that can save the party from defeat in 2023. Odii alone cannot win the governorship of Ebonyi State. Anyim and Egwu are aware that they have thrown the PDP family into a big mess in Ebonyi State; and they must bring their garb down to solve it or reap the unpleasant harvests.