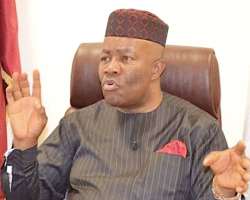 The INEC has refused to accept the primaries which produced Godswill Akpabio as the All Progressives Congress (APC) candidate in Akwa Ibom North West senatorial district.

The State APC Chairman, Mr Stephen Ntukekpo, had said he was directed by the party at the national level to carry out a re-run over alleged infractions.

According to the result of the rerun senatorial primary election, Akapbio emerged winner with 478 votes, while DIG Ekpo Udom (rtd), who won the first primary, secured just three votes.

But speaking with Daily Trust in Uyo, Akwa Ibom State capital, on Sunday, the Resident Electoral Commissioner, Akwa Ibom State, Mr Mike Igini, said the commission would only recognise the winner of the primaries monitored by INEC.

He denied the claim that the commission monitored the re-run APC senatorial primaries, where Akpabio emerged winner.

“The primaries was concluded on the 27th of last month, so I don’t know what you are talking about. The one that was conducted was monitored by INEC and the report has been submitted to Abuja.

“INEC is not aware of any senatorial primaries conducted on Thursday (June 9) that was monitored by INEC, none,” he stated.

The REC also affirmed that the APC has no governorship candidate in the state, saying the governorship primary where Mr Akanimo Udofia emerged winner was not monitored by INEC.

Also, the APC candidate in Akwa Ibom North-West Senatorial District in the 2023 general election, and Deputy Inspector-General of Police, Mr. Udom Ekpoudom (retd.), has vowed that he will not relinquish the APC senatorial district ticket which he won on May 27, 2022 to Senator Godswill Akpabio or anyone, no matter the pressure on him.

The statement assured the APC members in the Senatorial district that he will “under no circumstance, relinquish, withdraw or be substituted no matter the degree of pressure and inducement dangled by anyone.”

According to the statement, the mandate freely and expressly given to him to fly the APC ticket for next year’s senatorial election is not a commodity for buying and selling.