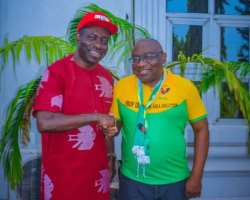 Governor Chukwuma Soludo says the All Progressives Grand Alliance, APGA, is the first registered progressive party in the country whose mission is to promote true federalism in the Country.

The Governor was speaking when the candidate of the party in Abia State, Prof. Greg Ibeh, paid him a consultative visit, following the successful conclusion of the primary election of the party.

According to Prof. Soludo, the election of the Presidency has grown beyond being a social media thing, saying that it is time for Ndi Igbo to calibrate their approach because election will only be won by forming methodical, systematic, concrete networks and alliances.

The Governor asked some South easterners who are dissipating into other platforms to come back under APGA to expand the frontiers of development and revealed that the bulk votes in the country are in the South West and North West, and not elsewhere. While stating that salvaging the country from decadence should be a down to up approach strategy, Professor Soludo welcomed Prof. Ibeh into APGA which he described as a movement and the third force, from where projection into the National will be done.

He called on all qualified candidates who contested the primary election in Abia state to demonstrate the spirit of sportsmanship to salvage the state and spoke about his administration's efforts in Anambra in terms of cleaner and greener cities, security among others.

Earlier, Prof. Ibeh noted that he had worked at different levels in the country and beyond, pointing out that his investment and contribution to Abia under his former political party wasn't appreciated, until he was eventually called back to serve with the APGA platform, expressing optimism that APGA will start to take over the reigns of power in the country, starting from South East states.

Prof. Ibeh who won the APGA primary election with 283 was accompanied to the visit by party officials.