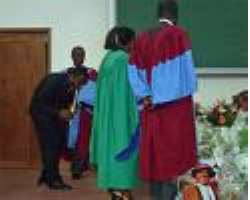 A critical look at the succession race characterized by intense politics, attacks and threats to life, scheming alien to the emergence of a University headship however raised the poser, whither the autonomy of the Universities?, as contained in the 2003 Universities (Miscellaneous Provisions) Act as amended.

In Zaria, palpable tension hangs ominously in the air following alleged plans by a section of the Ahmadu Bello University academic community to forcefully install a candidate who allegedly became a professor only recently and who acme a distant fifth at the end of the interview conducted by the University selection board to shop for a new Vice Chancellor.

Threat of possible down of Law and Order, including sectarian crisis of an unimaginable proportion if the “right thing” is not done with contending groups laying claim to its varied positions as being the “right thing”.

At Nnamdi Azikiwe University(UNIZIK), Awka, the numbers of professors which sources put at thirty, vieying for the Vice Chancellor post is generating so much anxiety in the university. The race has turned the citadel of learning into a political war front, following attacks and threats to life of some of the contestants.

The most worrisome was the dastard attack on the former Deputy Vice Chancellor DVC of the University, Professor Austin Ebiatu, a top contender with intimidating credentials whose house was burnt by unknown persons.

Also his daughter, a student of the University narrowly escaped the claws of suspected kidnappers in Awka while Professor Ebiatu himself, slipped through the jaws of death when suspected gunmen attempted to abduct him on two occasions.

Attention is now shifted to Federal University of Technology Yola FUTY, following the expiration of the six week duration for credentials for the University headship that elapsed last Friday.

In accordance with the amended Universities (Miscellaneous Provisions) Act, 2003, the search committee had been constituted to persuade whosoever is qualified to apply for the vacant post while the selection committee is expected to interact with all the shortlisted candidates and recommended three most suitable candidates to the University Council. The Council will then appoint one of the three and inform the visitor

.
Observers noted that the composition of FUTY External Council expected to represent variety of interest, considering it strategic role in the appointment of a Vice Chancellor however negate the federal character.

FUTY five-man External Council plus one nominee from the Federal Ministry of Education expected to reflect federal character at present comprises of three members of South-East origin, two North-Easterners including Ambassador Bukar Mele, the University Pro-chancellor and Chairman Governing Council and another member from (Sokoto) North-West, while the South-South, South-West and North-Central geo-political zones are not represented in the council.