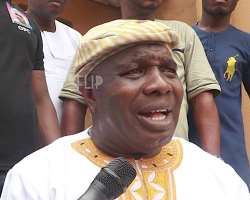 In a statement made available to The Nigerian Voice, The President General of the Pan-Yoruba organization, Aare Prince Osibote expressed shock at the brutal massacre of innocent worshippers.

He stated further that his organization will always stand against unprovoked attacks and killings of Yoruba people by unidentified persons because that is the core mandate of the organization.

Recall that on February 19, 2021, while at the Palace of His Imperial Majesty, the Ooni of Ife, Oba Babatunde Enitan Adeyeye Akande Ogunwusi Ojaja II, the leader of OPC hinted that “Nigeria is at a crossroads now. It needs collaboration among the main stakeholders to strike the vital chord of empathy, understanding and appreciation to reinvent itself. Consequences of violent actions are too grave to be imagined and contemplated. The scars are usually permanent, just as the trauma and wounds resonate immeasurably in the minds and memories”.