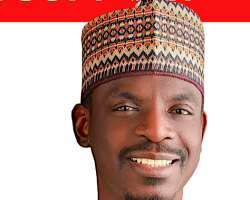 A former media aide to President Muhammadu Buhari (new media), Bashir Ahmad, has lost the APC ticket for the House of Representatives in Kano. Recall that Bashir resigned his appointment as a media aise to President Buhari by removing his bio “Personal Assistant on New Media to @MBuhari, the President of the Federal Republic of Nigeria” from his profile on Twitter.

He contested for the Gaya/Ajingi/Albasu constituency of Kano state.

Mr Ahmad had contested against Mahmud Gaya, the lawmaker who currently represents the constituency in Abuja.

The presidential aide secured a total of 16 votes, while Gaya polled 109 votes.

The result was announced on Friday night. It showed that Gaya secured 45, 36, and 28 votes in Gaya, Ajingi, and Albasu LGAs, respectively, while Ahmad got one, 11 and four in the three areas.

With the result, Gaya secured the APC ticket to seek a second term in the house of representatives in the 2023 elections.

Ahmad was said to have left the venue of the primary before the conclusion of the exercise.

Speaking on the development in a statement on his
Mr Ahmad revealed on his Facebook page that he left the venue of the primary over security concerns.