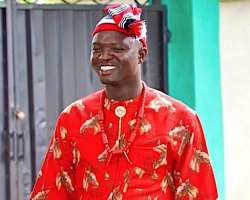 Speaker , Ebonyi State House of Assembly, Rt. Hon. Francis Ogbonna Nwifuru, has emerged as the governorship candidate of the All Progressives Congress (APC) in Ebonyi State.

Nwifuru emerged as the APC candidate in a delegate election conducted at Pa Ngele Oruta Stadium in Abakaliki.

Nwifuru polled a total of 743 to defeat his closest rival Mrs Rosemary Ofoke who scored 63 votes and other three Governorship Aspirants of the APC in the State.

Other contestants are Senator Julius Ali Ucha who came third with 22 votes while Edward Nkwegu scored 8 votes , Elias Mbam had two votes and a total of eight votes were declared invalid.

Officials of the Independent National Electoral Commission (INEC), and security agencies were on hand to monitor the exercise.

The Chairman of the Electoral Committee, Prof. Adebayo Emmanuel, who announced the results, expressed happiness over the peaceful conduct of the exercise.

Adebayo also applauded all the participants in the primary election for showing high level of transparency and orderliness throughout the exercise.