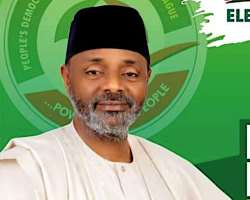 The News Agency of Nigeria (NAN) reports that Abacha polled 736 votes to defeat his closest rival, Jafar Sani-Bello, who scored 710 votes in the primary election on Wednesday in Kano state.

Announcing the results, the Returning Officer, Hajiya Amina Garba, declared Abacha as the winner of the primaries having scored 736 votes.

Also, a parallel primary was held at the Sani Abacha Youth Center, apart from the primary that produced Mohammad Abacha at the party secretariat.