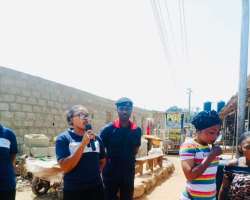 Ahead of the Osun State gubernatorial election, the Peace and Conflict Management Unit of the Nigeria Security and Civil Defence Corps (NSCDC), Osun State Command has taken peace awareness campaign to Sasa market in the State Capital, Osogbo.

Speaking on behalf of the state Commandant Emmanuel Ocheja, the Head of Peace and Conflict Management Unit (PCM), Chief Superintendent of Corps (CSC) Anjorin Oluwakemi, said the peace awareness campaign is necessary as preparations for the gubernatorial election is in top gear hence, the need to sensitize people on violence free gubernatorial polls cannot be emphasized at this period.

While sensitizing people at the market about the mandates of the Unit, CSC Anjorin appealed to both old and young people, who are mostly Yorubas and Hausas to embrace peace. She stressed that the strength of Nigeria lies in unity in diversity. CSC Anjorin further enjoined the market men and women to keenly watch over their children and wards so as not to be used as tools in the hands of political actors to cause mayhem or heat up the polity unnecessarily.

She added that Violence should not be a way of addressing grievances, saying the doors of Peace and Conflict Management Unit of the NSCDC are opened to mediate and resolve conflicts amicably among willing members of the public.

CSC Anjorin concluded that the Nigeria Security and Civil Defence (Amendment) Act 2007 empowers the unit to arrange and mediate in the settlement of civil disputes among willing members of the public in cases of Marital/Family issue, Breach of Agreement, Land Dispute, Communal Clash, Indebtedness, Tenancy, etc.

Responding to the visit, the Head of Yoruba market women Chief Mrs Adijat Moruf Salete (Iyaloja of Sasa market) and the Head of Hausa section of the market, Seriki AbdulRaman commended the efforts of NSCDC for organizing the peace awareness campaign in the market. They assured that all the market people would exercise their franchise during the forthcoming elections without being involved in violence.