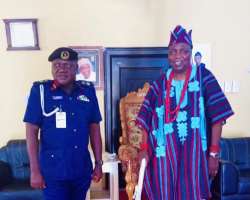 As part of his own contribution to combating insecurity in Osun state, His Royal Majesty Oba Sakariyau Oladimeji Owolabi, the Orangun of Ika, Ejigbo, Osun state has donated one operational vehicle, and accommodation to the Nigeria Security and Civil Defence Corps (NSCDC), Osun state command on 20th May, 2022. While presenting the vehicle to the state Commandant, Commandant Emmanuel Ocheja, the Orangun of Ika, Ejigbo, said the gesture is part of his corporate social responsibility to security architecture, explaining that security is a collective responsibility. Therefore, everyone must collaborate with security agencies to put an end to criminalities in the country.

HRM Oba Sakariyau Oladimeji said further that it is only in an atmosphere of peace and tranquility that development can take place. Hence, the monarch stressed the need to further partner with security personnel in the country. Speaking during the handing over of the vehicle and the apartment, Commandant Emmanuel Ocheja of the NSCDC, Osun State Command commended the Kabiyesi for the gesture. He said the gesture is timely as insecurity is on the high side in the country, noting that fight against insecurity should not be left for the government alone. He advised that everyone is expected to support security agencies in order to make the country safe for all. While assuring the king of judicious use of the vehicle and apartment, Commandant Ocheja said the gesture would be fully utilized for the purpose for which they were donated. He also called on well-meaning Nigerians to rise up to the challenges facing security agencies in the country.

CC Ocheja also pledged the unflinching commitment of the command towards combating crimes in the state. He also use the occasion to assure all residents of Osun State of adequate security before, during and after the forthcoming gubernatorial election.