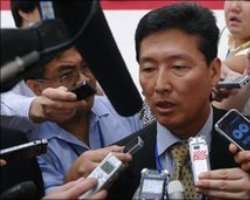 The US and South Korea's plans to hold joint military exercises pose a major danger to the region, Pyongyang says.

Some 20 ships and submarines and 100 aircraft are to take part in four days of manoeuvres in the Sea of Japan (East Sea) from Sunday.

North Korea has also said new US sanctions against it will violate a UN statement issued after the sinking of a South Korean warship.

Hillary Clinton announced the sanctions during a visit to South Korea.

The US secretary of state has now arrived in the Vietnamese capital, Hanoi, to attend a regional meeting of foreign ministers.

Chinese concerns
The US-South Korean joint military exercises, which will involve about 8,000 personnel and the nuclear-powered aircraft carrier USS George Washington, drew criticism from a member of Pyongyang's delegation at the regional security forum in Hanoi.

"The decision to hold military drills is a major danger for the security of the region," said the official, Ri Tong-il.

He said that if Washington and Seoul were really interested in the de-nuclearisation of the peninsula, they would take the lead in creating the conditions under which the six-party talks on the north's nuclear programme could resume.

China has objected to any foreign military operations in the Yellow Sea, which is on the western side of the Korean Peninsula.

On Wednesday, China expressed "deep concern" over the plans, which the US says are purely defensive in nature.

Later exercises are set to take place in the Yellow Sea.

Tensions between the two Koreas were raised in March, when the South Korean warship the Cheonan was sunk with the loss of 46 lives.

A multinational investigation team found the ship had been torpedoed by North Korea - a conclusion that Pyongyang rejects.

Ri Tong-il added that the US decision to impose new sanctions - announced on Wednesday - violated a statement from the UN about the sinking that was issued earlier this month.

The UN statement held back from directly blaming North Korea, but condemned the sinking as a threat to regional security.

It called for "appropriate and peaceful measures" against those responsible, and called for direct talks between all parties about tensions in the area.

New sanctions
Speaking in South Korea on Wednesday, Mrs Clinton said the new US sanctions would target Pyongyang's sale and purchase of arms and import of luxury goods, and would help prevent nuclear proliferation.

She said the measures would increase Washington's ability to "prevent North Korea's proliferation, to halt their illicit activities that help fund their weapons programmes, and to discourage further provocative actions".

The sanctions were not directed at the North Korean people but at the "misguided and malign priorities of their government", she said.

Mrs Clinton said she expected North Korea to "take certain steps that would acknowledge their responsibility" for the incident and to move towards denuclearisation.

"They know very well that they made commitments over the last years to the denuclearisation of the Korean peninsula which they have reneged on and which we expect them to once again adhere to," she told reporters.

"We are looking for irreversible denuclearisation."

The announcement came after Mrs Clinton and US Defence Secretary Robert Gates visited the Demilitarised Zone (DMZ) between North and South Korea, in a show of support for Seoul following the sinking of the Cheonan in March.

North and South Korea technically remain at war because their three-year conflict ended in an armistice in 1953 and no peace treaty was signed. The US has since stationed thousands of troops in South Korea.