By All Progressives Grand Alliance (APGA) 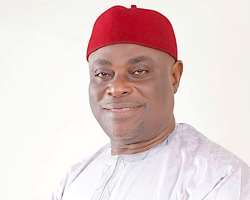 The attention of our great party, the All Progressives Grand Alliance (APGA) has been drawn to an utterly false and fictitious story making the rounds wherein the Supreme Court purportedly reviewed its judgment delivered on the 14th day of October, 2021 dismissing the appeal brought by one Chief Jude Okeke against the judgment of the Court of Appeal, Kano Division. In the said ludicrous story which has now gone viral on various social media platforms, the apex court was reported to have 'coronated' one Chief Edozie Njoku as the National Chairman of APGA.

We wish to state that contrary to the wishful thinking of the naysayers, no such decision was delivered by the Supreme Court on the 9th day of May, 2022 or on any other date. It is on record that the Supreme Court in SC. 686/2021 merely held that the dispute over the National Chairmanship of APGA is not justiciable and is not within the jurisdiction of the Court. The apex court in making that statement merely mentioned Edozie Njoku as the name utilized by the Plaintiff in Birnin Kudu as the National Chairman of APGA who was purpotedly removed to pave way for Chief Jude Okeke. The Kano Division of the Court of Appeal, whose judgment was affirmed by the Supreme Court, clearly stated that the Jigawa High Court had no jurisdiction to entertain the suit and thus set aside the Birnin Kudu judgment alongside the consequential orders made therein.

We wish to categorically state that by holding that the trial Court lacked jurisdiction to entertain the suit ab initio, the Supreme Court could not have made any positive orders to enure in favour of Chief Edozie Njoku or any other person whatsoever.

It's on record that the Supreme Court in delivering its judgment aforesaid similarly dismissed the appeal brought by Chief Edozie Njoku against the ruling of the Kano Division of the Court of Appeal which dismissed his application to appeal as an interested party. It therefore beats any reasonable imagination how the Supreme Court would turn around to overrule itself after dismissing the grossly incompetent appeal filed by Edozie Njoku.

A careful perusal of the document presently bandied by Chief Edozie Njoku and his hirelings readily reveals that the judgment was against the said Chief Edozie Njoku whose media urchins are polluting the space with the fake news. The Supreme Court not only struck out the appeal as an abuse of Court process but awarded 1m naira cost against the Appellants.

Furthermore, the certified true copy of the Supreme Court judgment shows that Chief Victor Oye was the 2nd Respondent at the Supreme Court and was duly represented by Chief Wole Olanipekun SAN, Dr Onyechi Ikpeazu SAN, PIN Ikwueto SAN alongside others. However, in a poorly scripted fraudulent attempt to mislead the public, Chief Edozie Njoku's name was inserted in the doctored judgment as the 2nd Respondent when Chief Edozie Njoku was not a party in the appeal at the Supreme Court. In any event, there are subsisting judgments of various superior courts of records that have made definite pronouncements on APGA leadership by affirming the May 31, 2019 National Convention of APGA held in Awka, Anambra State.

We wish to assure our party faithful and indeed the members of the public that there is no purported change whatsoever in the leadership of APGA. Ozonkpu Dr Victor Ike Oye remains the National Chairman of APGA and has not been removed by any court. The general public are therefore advised to ignore the false, fictitious and misleading story being peddled by the agents of distraction. Our great party is solely focused in the process of nomination of credible candidates that will deliver our country from its present state of underdevelopment.

Our great party has alerted the relevant security agencies to commence investigation towards the possible prosecution of those who may be found culpable in the forgery and mutilation of vital court judgments.