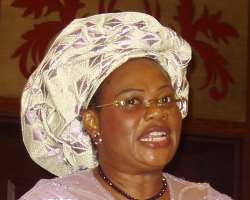 Following reports of fracas at the burial of Dora Akunyili's sister in Anambra she sent out this press statement from her father's compound at Nanka, Anambra State.

"I came down to my village to join my family, relations and well wishers to pay my last respect to my late sister Gloria but unknown to me, my family and invited guests, a large number of thugs loyal to Prof. Charles Soludo were carefully organized to disrupt my participation in my sister's burial ceremony. I have never seen the number of thugs I saw on Friday in any event. The thugs were also instructed to embarrass my invited guests. As you may be aware, Prof. Charles Soludo is marrying my late elder sister's daughter Nonye. So we are in-laws, but since he lost the last gubernatorial election in Anambra State, Prof. Soludo has singled me out as the source of his failure to win the election, and he convinced my sister to believe that I was the cause of his failure. All efforts by people to make him understand that I alone cannot make him Governor have failed. So he brought that anger, grudge and frustration to the burial of his mother in-law who is also my elder sister. All arrangements made by me and my other siblings to receive guests at Isuofia, where my late sister was residing (which is also Soludo's village) were vandalized by Soludo's hired thugs. They followed this up with text messages of blackmail to my guests, friends and well wishers. When the environment in Isuofia became too insecure, tense and hostile, I quietly relocated to my father's compound at Nanka which is few kilometres away just to avoid trouble. But Soludo's thugs also trailed us to my own village Nanka to commence trouble but the security agents quietly dismissed them.

I want to remark that my late sister Gloria was a very peaceful, Godly and well brought up woman. While she was alive, I enjoyed her love and friendship as a sister no matter what Soludo and his hired thugs think. Because of this, even in death, I will do nothing to dishonour her because what Soludo and his thugs has done is to dishonour her but God has taken control. I therefore wish to thank all my invited guest for their understanding and the church for their prayers and co-operation.”