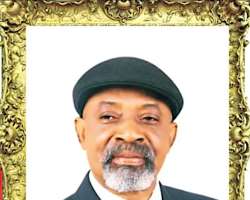 The Minister of Labour and Employment, Senator Chris Ngige has been nominated by the Nigerian Medical Association (NMA) for its meritorious service award in the health sector.

This development was contained in a letter signed by the President of NMA, Prof (Dr) Innocent Ujah and the Secretary-General, Dr Philip Ekpe which was addressed to the Minister.

The letter dated April 28, 2022, was titled, “Invitation as an awardee at the Annual General Conference/Delegates Meeting (AGC/ADM) of the Nigerian Medical Association (NMA).”

According to the letter, it reads: “We write on behalf of the National Officers Committee (NOC) and the entire membership of the Nigerian Medical Association (NMA), to invite you to the Annual General Conference/Delegates Meeting (ADM) of the association as an awardee.

The conference which has its theme “Current Emergencies in building a resilient health system for Nigeria: Situation Analysis and Solutions” is scheduled to hold from Sunday, May 15 to Sunday, May 22, 2022, at EUI Centre, Plot F11, Sanni Abacha Road, GRA Phase 3, Port Harcourt, Rivers State, Nigeria.

“We have the pleasure to inform you of your nomination for recognition for the Meritorious Service Award in the health sector by the Association.”

The letter revealed that the award would be conferred on the Minister during the opening ceremony scheduled for Thursday, May 19, 2022, by 10am.

Meanwhile, Ngige who has accepted the nomination, thanked the NMA for finding him worthy of such recognition.

He added that award shows that his efforts towards the development of the health sector and other good works in Nigeria had not gone unnoticed.

He assured that the award would definitely spur him to do more towards the upliftment of the health sector and the development of Nigeria.